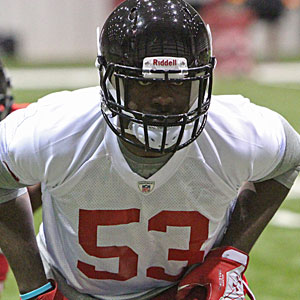 Like most young football players, Brian Banks spent years dreaming of the day he’d run out of the tunnel onto an NFL field. However, the once-prized high school linebacker did most of his dreaming in prison and under house arrest, wrongfully convicted of rape at the age of seventeen in 2002. Exonerated last year, Banks signed with the Falcons in April as a long shot to make the fifty-three-man roster. But lining up against the seasoned pros at summer mini-camp, the twenty-eight-year-old rookie was philosophical: “Every step forward is an accomplishment,” he said. “I don’t take anything for granted. Football is just the first step—there’s so much more to Brian Banks.”

Banks can unload a decade’s worth of ambitions—from motivational speaking to book writing to food franchising. But if he is somehow able to fulfill his first dream, he’ll run out onto the Georgia Dome turf this month wearing the number he was given at camp, a number that he feels came from a power higher than the equipment manager: 53.