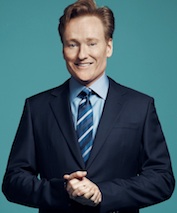 With a sly wink to one of television’s biggest blunders, late night TV host Conan O’Brien will return this summer to host The Tonight Show on Atlanta’s own Turner Classic Movies. Beginning July 1, the current TBS Conan host will expand his Turner Broadcasting resume with an additional gig at TCM, introducing and providing insight for Carson on TCM, a month-long look at classic Johnny Carson interviews from his long-running stint as Tonight Show host. The interviews, many of which aired just once on NBC, will span from Carson’s 1973 chat with Tony Curtis to the late-night host’s final interview with Elizabeth Taylor in 1992.

Via a statement, TBS, TNT and TCM chief marketing officer Jeff Gregor explains: “With its connection between late-night television and classic films, Carson on TCM offers the perfect opportunity to bring TBS’s popular late-night host to Turner Classic Movies. Conan has long idolized Johnny Carson and he understands what’s it’s like to be on the other side of the desk. We’re thrilled to have him coming to TCM to share his unique insight and perspective.”

The Monday night series will kick off July 1 with Carson’s interview with Drew Barrymore, the current co-host of TCM’s The Essentials. The interview is from 1982 when the then-seven-year-old actress was busy promoting his new motion picture “E.T.” The night will also include Carson’s 1988 chat with Kirk Douglas, a 1978 conversation with Mary Tyler Moore, a 1980 interview with Neil Simon and 1989’s couch time with George Burns. Among the other Hollywood icons included in the cigarette smoke accented series: Doris Day, Shelley Winters, Bette Davis, William Holden, Fred Astaire, Mel Brooks, Robin Williams, Henry Fonda and a pre-presidency chat from 1975 with Ronald Reagan.

As you’ll no doubt recall, O’Brien was finally given his dream job of hosting Tonight on NBC back in 2009 when the peacock network moved Jay Leno into prime time. That experiment bombed and O’Brien was out of a job by January 2010 (albeit with an estimated $40 million check presented to him in his exit interview). Leno was back hosting Tonight until this spring when NBC announced Leno was out of the job and Jimmy Fallon would step into the gig next year with fellow SNL vet Seth Meyers replacing Fallon at 12:30 a.m.
TBS quickly courted Conan and offered him an edgier opportunity hosting his own show on their basic cable network TBS and recently renewed the show through 2015. TBS’s sister network, TNT, meanwhile, snapped up the rights to critically acclaimed NBC drama “Southland” that was unceremoniously cancelled to make room for Leno in primetime. The cult show eventually ran for five seasons, ending its run this spring on TNT.

For the full Carson on TCM line-up, go to the official website.