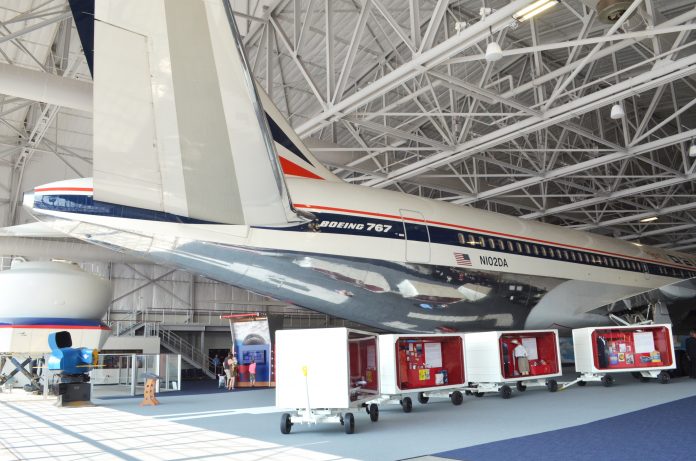 Take off in Dallas, land in Jackson, Mississippi: a five-hour flight with a pit-stop for food in Monroe, Louisiana. Compared to today’s standard one-hour flight or six-hour drive, five hours in the air seems excessive (or just completely ridiculous) and only worth it to avoid traffic headaches.

But try the same scenario 85 years ago, and it’s the history-making first passenger flight for Delta Airlines. The beginning of an air travel era and the best thing since Henry Ford mass-produced the Tin Lizzie.

To commemorate the revolutionary moment—and celebrate the institution of airplane peanuts instead of Louisiana meal breaks—Delta showed off the recent renovations to its 68,000 square-foot Delta Flight Museum, a Historic Aerospace Site as of 2011.

The museum includes the airline’s first Boeing 767, dubbed “The Spirit of Delta,” as well as four other historic aircrafts, a full-motion simulator, and plenty of other relics and corresponding tidbits. Nestled within one of the luggage carriers turned display-cases is a statement by Richard Anderson, CEO of Delta, who also spoke at the grand opening on Tuesday: “The growth and success of Delta and the city of Atlanta have long been intertwined, and each has prospered. Atlanta grew into a major international city, while Delta built the world’s largest hub at the city’s airport.”

Governor Nathan Deal presented a proclamation declaring June 17 as Delta Airlines Day in Georgia. Also in attendance was Atlanta Mayor Kasim Reed, and while he admitted that “I can’t give you a day like the governor can,” he did express the city’s gratitude by bestowing the company with a Phoenix Award.

A trip inside the Boeing 767 reveals some of the secrets of success for the company, but you can be the judge as to whether flight attendants in electric blue and chartreuse poncho-dresses, animal fur coats, or Hawaiian luau garb kept the company alive for millions of flights.

Interactive screens under the passenger jet allow visitors to watch old company commercials, view the “family tree” of airlines that merged to create Delta today, or match the company logos to the correct year. Additional trivia is provided in the museum tours. And there’s also a one-of-a-kind Boeing 737-200 full motion simulator that operates with countless buttons and switches for those who want to experience Delta flight without the tedium of standing in security lines at Hartsfield-Jackson.

The museum is located in Delta’s headquarters, just off Airport Loop Road, and is open six days a week. For details, see deltamuseum.org