Home Sports Everything you need to know about the Atlanta Falcons 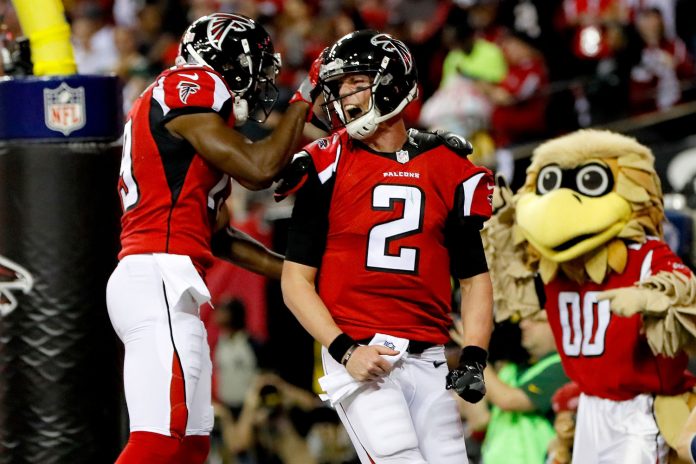 Atlanta is a city of transients, and as such, gets a bad rap for not having a proportionately passionate local fan base. But when Atlanta takes the field in Houston this Sunday for Super Bowl LI, it will be the first time a local major-league team has even sniffed a championship in almost 20 years. So it’s acceptable, if not your civic duty, to jump on the bandwagon and root for the Hawks . . . er . . . the Falcons!

Still, you don’t want to look like a fair-weather fan. We’ve put together a quick primer that should help you fit in at any Super Sunday soiree.

Key players
Matt Ryan (2)—All-Pro quarterback coming off an MVP-caliber year, finally shaking off the unfair stigma of being an underachiever and postseason disappearing act. His nickname is “Matty Ice” because he’s cool under pressure and because it rhymes with “Natty Ice,” shorthand for Natural Light Ice beer, which some rural Falcons fans drink by the case. (Okay, we might have made that last part up.)

Dan Quinn—This is his second year as head coach—of any team. Ever. That inexperience made him a controversial hire, but now he’s one win away from a statue in the parking lot that will replace the 25-year-old Georgia Dome. (Hopefully his monument will last longer.)

Season highlights
Week 2: After a disappointing home loss in the season opener to the Buccaneers, the Falcons were tied in the fourth quarter at Oakland. Ryan had a third-down pass deflected into the arms of Justin Hardy, who just happened to be standing in the end zone. Atlanta’s luck continued in the ensuing possession when the Raiders had a 51-yard TD pass waved off because the receiver went out-of-bounds. The 35-28 Falcons win was the start of a four-game winning streak and a good omen.

Week 4: Ryan throws for 503 yards and Jones pulls down 300 yards receiving, marking the first time in the Super Bowl era that a quarterback and receiver have done so.

Week 7: The Birds wore throwback black jerseys from 1966. And just as that team did 11 times—and many, many more times in the next few years—Atlanta lost to the Chargers.

Week 16: After beating the rival Panthers 33-16, the Falcons clinched their first NFC South Division title since 2012—assuring that the Georgia Dome would get at least one last hurrah.

Week 17: Ryan ends the season with 331 yards passing and 4 TDs in a win over New Orleans. Matty Ice finished with a 117.1 QB Rating, fifth best in NFL history.

Divisional Playoff: Falcons 36, Seahawks 20. Atlanta goes to the NFC Championship game for the first time since a heart-wrenching loss to the 49ers in 2012.

NFC Championship: The last game ever at the Georgia Dome, Falcons sent the “old” place off in style by throttling the Packers 44-21. On to Houston!

Falcons Super Bowl history
Brief. The first, and previously only, time the Falcons made the big game was Super Bowl XXXIII in 1999. These were the “Dirty Birds,” led by running back Jamal Anderson and All-Pro safety Eugene Robinson. The night before the game, Robinson was arrested by an undercover cop for soliciting a prostitute. The next day, he gave up an 80-yard touchdown pass and missed a key tackle late in the game, which the Falcons dropped to the Denver Broncos 34-19.

Something you should never say to a Falcons fan
“My favorite player is Eugene Robinson.”

Slogans you need to know
Rise Up: Sure, it’s an official campaign, cooked up by an advertising firm in 2010. It’s not even original, having been used by several other teams, including the Hawks awhile back. But you’re guaranteed to hear this rallying cry at any game or viewing party. Just goes to show that Samuel L. Jackson can turn anything into an immortal catch phrase (more on that below).

In Brotherhood: Speaking of a borrowed phrase, Coach Quinn lifted this motivational gem from a band of Navy Seals that came to speak to the team. While “Rise Up” has become the mantra of the people in the stands, “In Brotherhood” is the team’s rallying cry in the locker room and on the field. (Although fans get in on the action through social media with #InBrotherhood.)

Dirty Bird: The calling card of the last Super Bowl-bound Atlanta team was a bit more spontaneous. And since it was the 1990s—you know it also had its own dance. The phrase and choreography were hatched by running back Jamal Anderson as an end zone celebration.

Famous Falcons fans
Samuel L. Jackson—Super fan, face of the Rise Up campaign, and a must-follow for his in-game commentary, which is, of course, often R-Rated, MUGHPFUUHGQQQAH!

Usher—The Atlanta resident and R&B superstar is often spotted on the Falcons sidelines.

Big Boi—The hometown rapper (and one half of Outkast) is a vocal ATL fan and even designed his own Falcons New Era Caps.

Cam Newton—Even the MVP quarterback of the rival Carolina Panthers can’t outgrow the love for his hometown team.

Falcons-Pats history
Since the franchises play in different conferences and both have experienced long periods of mediocrity—though New England’s is hard to remember—the two teams have only faced each other a handful of times. The Pats lead the all-time series 7-6.

But there is a connection: When Blank first bought the Falcons in 2001, he had never owned a professional sports team. He turned New England owner Robert Kraft for advice. Kraft told Blank to just run the team like he had run Home Depot—and to get used to being followed around by reporters. Blank told us in an interview last week that the two were hoping to face each other this year. “I’ve often had to remind him that we’re not actually going to be playing each other on the field . . . it’s our teams who will!” he said.

Trash talking Patriots fans 101
Making their ninth Super Bowl appearance (the most of any other franchise), the Patriots have won four titles. All that success, combined with a couple of cheating scandals, has made them extremely hateable outside of New England. Here are some pressure points to aim for:

Star Wars jokes: Between the team’s sinister dominance and Coach Bill Belichik’s constantly dour mood, the Patriots have earned comparisons to the Galactic Empire. Try downloading the “Imperial March” as a ring tone to play each time New England scores.

Bandwagon: If they don’t know the name Tony Eason, they’re not true Patriots fans—and probably won’t know enough about football or the Falcons to call you out as a hypocrite.

It’s Chow-dah!: If all else fails to flap the Pats fans, just poke fun at that outlandish accent, y’all!