Officially, the College Football Playoff is a new thing. So perhaps we should forgive those who fail to realize Atlanta invented the format years ago—with a little contest called the SEC Championship.

Three times during the conference’s seven-year national title domination, that SEC title game in the Georgia Dome pitted two of the country’s top three teams against each other, essentially serving the role of one of the bowl games in the “new” format. In 2008 and 2009, Alabama and Florida were the country’s top-ranked teams heading into the SEC game. And in 2012, Alabama and Georgia battled for the right to demolish number one Notre Dame. Nine of the last 11 teams to win in Atlanta in December went on to play for national titles. That’s as close to a semifinal as a sport without a semifinal ever had.

So the new postseason setup robs that game in the Dome of a little shine; the SEC’s champion will, at best, be just one of four playoff teams. And it’s probable that the SEC occasionally will have a playoff team that didn’t even win the Georgia Dome showdown.

But there’s an upside for Atlanta. The playoff structure rotates semifinals among six New Year’s bowls, one of which is the Chick-fil-A Peach Bowl (and yes, after a few years as a chicken sandwich branding exercise, the event once again has peach in its name). This will mean that our city hosts two of the eight most important college football games every season. You can also expect the ATL to host the national championship once a decade or so; the city already submitted a bid to host the 2018 game in the new Falcons arena. College football’s spotlight on Atlanta isn’t going away. Indeed, it’s only glowing brighter.

On the calendar: The Chick-fil-A Peach Bowl will be held on December 31.

Based in Atlanta, Kirk is college football editor for SB Nation. 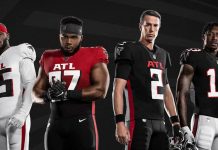 Back in black: A brief look at Atlanta Falcons uniforms throughout the decades