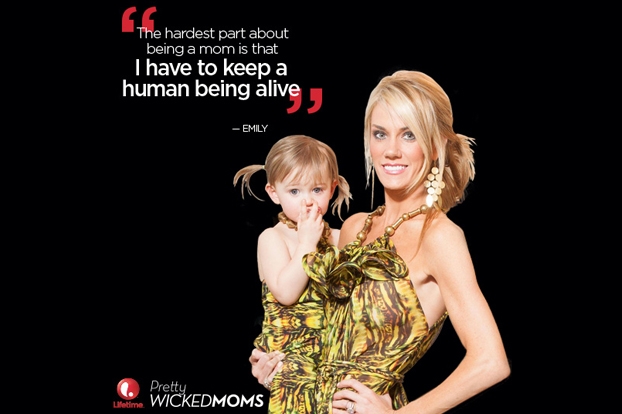 From the series’ Facebook page: “Ah, the cut-throat, crazy world of competitive mothering…and for six feisty Atlanta mothers in Lifetime’s all-new unscripted comedy Pretty Wicked Moms, it’s a raging, raucous mommy war.” It seems like a none-too-subtle if somewhat-more-focused take on RHOA. But can Emily be the next Kim?

I met Emily at a few social events back in my style editor days. I know her as an intimidatingly driven businesswoman with a fierce fashion sense that only someone with her austere figure could pull off. I can only imagine what persona she’ll take on in front of the cameras when she’s playing reality TV’s twisted game, but I imagine I’ll have nightmares about it.

Emily’s always been a force to be reckoned with. Just read my colleague Elizabeth Florio’s review of Emily’s Shops Around Lenox boutique from three years ago. As she wryly observed in her opening sentence, “Emily Dees Boulden doesn’t waste a lot of time.” Understatement.

Any bets as to how many times Swank appears on the show? I’m guessing four per episode. Hopefully with wine.

Speaking of alcohol, instead of drinking, how about you try this local-economy-supporting shopping alternative to the tried-and-true drinking game:

You’ll be broke in no time!

If you want to partake in the carnage, the series premieres Tuesday, June 4, at 10 p.m.