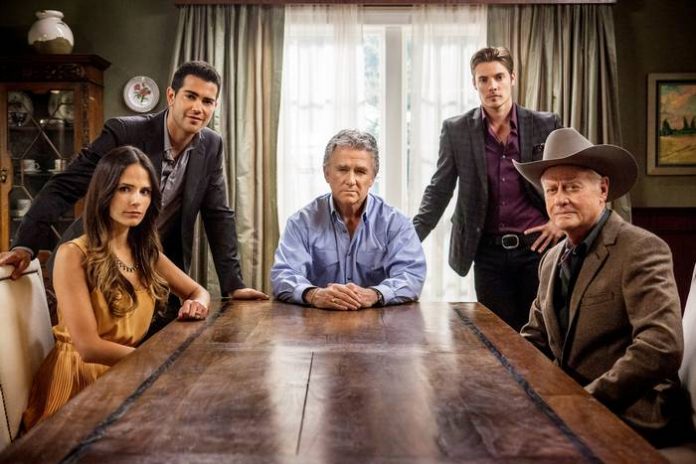 Just a handful of episodes into shooting the second season of TNT’s successful reboot of “Dallas” on location in Texas last fall, the primetime soap’s iconic star Larry Hagman unexpectedly died after a long battle with cancer. Since J.R. Ewing is hardwired into the drama’s DNA, Hagman’s passing left a hole the size of The Lone Star State itself in the show’s storyline. The actor’s longtime cast mates Patrick Duffy and Linda Gray, meanwhile, were left to eulogize their friend both in real life and grieve on screen.

Hagman’s final episodes begin airing tonight at 9 as the second season of the show begins on TNT. In an interview with Atlanta magazine, Patrick Duffy, 63, discusses life on Southfork without it’s famous bullet-proof villain.

Q: How difficult has it been to continue shooting this second season without Larry?

A: It’s been difficult in the sense that Larry’s death is an obvious reality and I had to accept it. I had to accept that my day-to-day relationship with my best friend is no longer there. But easy from the standpoint that I’m not suffering by Larry’s passing. He was my best friend for 35 years, I was with him up until the very end, I have no regrets and there wasn’t one thing I wanted to say to him that I didn’t get to say. But it’s tough not being able to stop by his dressing room every morning on the way to work for a laugh. We all miss the man but believe me, my friendship remains intact with the man.

Q: When I interviewed Larry last year, he was 81 and one of the best-paid TV actors in history. I asked him why, after playing J.R. in hundreds and hundreds of episodes, he would return to the role. He just said, “Getting the chance to work with Patrick and Linda again.”

A: That’s the reason we all came back. And we wouldn’t have come back if either of the other two hadn’t wanted to do it. It was just a given. If Larry had said, “No, I don’t want to do it,” Linda and I would have turned it down as well. It was three of us or none of us. That’s just how it always was. We love each other.

Q: How much fun is it to return to playing Bobby Ewing decades later and explore him at this stage of his life?

A: You nailed it. I tell people all the time, “How many actors get to do this?” It’s rare to get a stab at playing a character again when he’s 35 years older and figure out who that guy grew up to be. It’s great fun because we get to do this with the next generation and we get to look at them play the same dysfunctions Larry and I played 30-plus years ago. Christopher and John Ross are now playing out that same Bobby/J.R. dynamic. Josh [Henderson] and Jesse [Metcalfe] are two amazing young actors who have jumped into their parts, just the way Larry and I did. Larry and I both realized that we were at this bucolic-like stage now on the show. Now that Larry’s gone, that’s going to be part of my function, to serve as the patriarch of the Ewing family. It’s really satisfying. As a person who is soon to be 64, I’m not going to try and play a young kid anymore. It’s enjoyable to relax, both as the character and as an actor. That’s one thing that age has taught both Bobby and Patrick. It’s taught us patience and a deepening level of gratitude. Our executive producer Cynthia Cidre and our writing staff understands that and puts in down on paper really, really well.

Q: I have to admit that I’m incredibly impressed at Cynthia Cidre’s brilliance in re-imagining and re-inventing this show for a 2013 television audience. I remember getting the pilot screener last year and thinking, “This can go one of two ways…”

A: Exactly. She’s the only reason why we’re all here, to be quite honest. Larry, Linda and I all read the pilot script that she wrote completely by herself and that was when we knew there was a realistic chance we could do this show again. For the first time, somebody understood it and she’s been able to maintain that integrity through two seasons now. She is absolutely the reason we’re here. And now, there’s a whole bunch of people who support her vision. When [original “Dallas” executive producer] Leonard Katzman died [in 1996], Larry, Linda and I thought the ability to do “Dallas” died with him. We’ve been proven wrong. It’s alive and well, it’s just now in the form of a shorter, way better-looking woman.

Q: In the season premiere, viewers get to see the gorgeous new offices of Ewing Energies and your first scene with Larry is priceless. Serial workplace sexual harrasser J.R. turns up with a muffin basket for the secretaries, only to discover to his horror, in 2013, most of them are male. I loved that they wrote J.R. as sort of this man out of time and Larry was completely on board for all that.

A: [Laughs] I know! And J.R.’s great response to Bobby is “Where’s the sport in that?!” There aren’t a lot of people who could get away with a line like that and have you still like them. And Larry’s the guy to pull it off!

Q: Where are you in the season two shooting schedule?

A: We’re a little over half-way. We just finished the episode where we’ve addressed the fact that the character of J.R. has been killed. But we’ve got to solve the problem of where, when, how and why. That will be a part of the drama we shoot as we move forward. I’m glad that Cynthia and the writers opted to address it right away and not pretend it didn’t happen. J.R. just disappearing and still pulling the puppet strings would have been disrespectful for both the character and for Larry. They’ve done this in completely the right way. Moving forward, J.R. continues to be a heavy influence in the show. We’re going to discover that J.R. set a lot of smoldering fires that erupt down the line. His influence will always be with us.

Q: The fact that the writers were able to weave this into a second season you were already in five episodes into shooting is pretty remarkable.

A: It is remarkable. Thank God, I’m not a writer. I’m sure everyone would have liked to have taken a week or so to deal with it however they wanted to. Literally, the day after Thanksgiving, the writing staff in Los Angeles gathered together and said, “OK, there’s no vacation for us. We have to completely reconstruct nine episodes of a television show that we’ve already written.” And they did it. The network has seen the rough drafts, everyone likes where we’re headed and the show will not suffer. I think the fans will really appreciate the way things are being handled and so would Larry. It’s a real tribute to both his and J.R.’s legacies.

The two-hour season premiere of “Dallas” airs tonight at 9 on TNT.