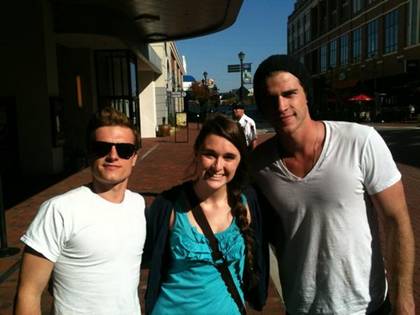 The good news? Thanks to Twitter, Tumblr and Instagram, the source of that high-pitched shrieking heard this week throughout West Midtown has finally been identified. Actors Josh Hutcherson and Liam Hemsworth (Oh. My. God. So Gorgeous!!), who are here currently shooting “Catching Fire,” the second “Hunger Games” blockbuster, were spotted by a young fan taking in a screening of their “Hunger Games” co-star Woody Harrelson‘s edgy new dark comedy “Seven Psychopaths” at Atlantic Station’s Regal Stadium 16. The ever-gracious actors happily posed for a photo with “Hunger Games” fan Rebecca Foust outside the theater. She later became the coolest kid in her Twitter-sphere when she shared the photo on Twitter (photo by @rebeccaaaf at right) and Atlantic Station borrowed it for the retail/residential center’s Instagram account.

Tweeted Foust to friends: “OMG, Liam’s Australian accent was killin’ me…I am still peeing myself” and “My picture has gone viral, people are reposting it on Tumblr and Instagram. Weird seeing yourself under a hash tag…”

Alas, not everyone, like, recognized the teen idols. Apparently, an Atlantic Station mall cop promptly ordered Hemsworth to, well, pull up his britches. Tweeted Foust: “Haha, Liam got yelled at by a cop for sagging. I’m not even joking.”