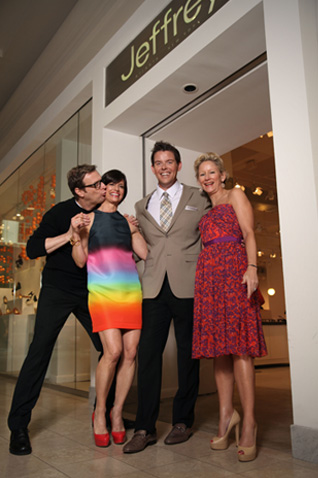 As always, supporters eagerly anticipating the city’s 20th annual Jeffrey Fashion Cares Monday night at the American Cancer Society Center downtown will likely spend the weekend searching for just the right outfit to wear to the unofficial start of the fall social season. But for others, who have traditionally supported Atlanta and New York retailer Jeffrey Kalinsky‘s yearly evening of fun, fashion and charitable giving for the Susan G. Komen for the Cure of Greater Atlanta and the Atlanta AIDS Fund, the decision to attend this year is more complicated. For some, the notion of cutting a check to a charitable fundraiser supporting Komen in 2012 ranks right up there with satisfying a craving for waffle fries and being seen idling in a Chick-fil-A drive thru.

Last winter, the formerly warm and fuzzy pink-hued breast cancer charity ignited a firestorm of controversy when it opted to de-fund Planned Parenthood, reversing its decision only after the topic trended across social media platforms and a tidal wave of bad PR crashed ashore at the nonprofit. Komen senior vice-president of public policy Karen Handel, who in 2010 lost an acrimonious anti-abortion, anti-gay campaign against Nathan Deal for Georgia governor, resigned her position in February, after taking credit for crafting Komen’s original decision to cut Planned Parenthood funding. Next month, she will release a book on the subject, “Planned Bullyhood.” This month, the charity announced that founding CEO Nancy Brinker and its current president Liz Thompson are also out at Komen.

When your fashion fundraiser’s targeted demographics primarily focus on women and gay men, any lingering ill will toward Komen’s perceived conservative behind-the-scenes political machinations could be seen as a challenge.

But for Lila Hertz, a breast cancer survivor, who is celebrating her 10th anniversary co-chairing Fashion Cares this year, the decision to continue funding the local work of Komen was not complicated. “Komen delivers the most efficient service to the greatest number of people better than any [breast cancer] charity that I know of,” Hertz explains. “We want to continue to support that. Last year, we reached 151,000 people through the work Komen does. We just feel like that’s the best place to put the money.”

Given that participation was down as much as 40 percent at this summer’s Komen Global Race for the Cure in Washington D.C., did Hertz and her co-chairs Jeffrey McQuithy and Louise Sams experience any trepidation about retaining Komen as a Fashion Cares recipient this year? “No,” explains Hertz. “I think it gave us more energy than ever to continue to fund Komen because we know what a great job they do here. I’m so passionate about Komen and I’m so passionate about Fashion Cares. I would say to people who are on the fence to put politics aside to help women here. The money that is raised here, stays here. Seventy five percent of it stays here and serves women here. Again, I want to stress that I don’t know of a more efficient way of delivering money straight to people who need it. The other 25 percent goes to cutting edge research. It does not support the national office. I would ask people not to even think about that.”

Adds Kalinsky during an interview with Atlanta magazine from New York: “I believe that Susan G. Komen does exceptional work in educating women, helping women, screening women and saving lives. They do a great job at servicing the entire country. If I found out someone I knew had breast cancer, they’re the first charity I would contact. It never crossed my mind for one minute that we would not be moving forward with Komen as a beneficiary this year. The positives of what Komen does far outweigh what might have been a poor decision. I hope the attendees in Atlanta are coming because they want to donate money to help in prevention and education relating to breast cancer and HIV/AIDS. I can’t think of a better way to support two great charities than to support Fashion Cares.”

Seeking to distance itself from the national controversy, the Susan G. Komen for the Cure of Greater Atlanta affiliate has posted the following message to donors on its website: “As an affiliated, but separate, corporate entity from the national organization, the Greater Atlanta affiliate makes all of its funding decisions on the local level. Komen Atlanta currently provides $2.2 million in funding to 22 Atlanta area breast cancer screening and support services. The Atlanta area Planned Parenthood organization has never requested funding from Komen Atlanta so they have never received funds from our organization. Komen remains committed to ensuring that all women, especially the underserved, in our community have access to lifesaving breast cancer screening and support services.”

As he prepares to walk down the Fashion Cares runway for the 20th time next week, Kalinsky was asked to reflect on two decades of giving. He says: “Does it feel like it’s been 20 years? Yes and no, to be completely honest. Because I was young when we started it, I just had an idea and I acted upon it. It turned out to be a really great decision and one that’s played a major role in my life. It’s meant making a commitment to community and philanthropic service work. That first year, we held it in a tent at Phipps Plaza and it was a fashion show of [Bob Ellis] shoes only. I believe we raised something like $40,000 that year which was not peanuts. We raised a significant amount of money. It was an AIDS fundraiser and it benefited Common Ground, which was operating on Juniper Street. People were dying. It was really scary time.”

Over the years, Kalinsky says he’s learned many lessons while hosting the fashion fundraiser, chiefly when to shut up. Kalinsky concedes with a chuckle: “I’ve learned a lot about what works and what doesn’t and you have to entertain the people who attend. Over the years, I made lots of mistakes because I was young and I didn’t know better. I had to have things pointed out to me. I had to see things on video like, ‘Oh, my God, I said that? I talked that much?!’ Nobody pays to come to hear me talk. They pay to have a good time. I had to learn that!”

This year, Kalinsky says he wants to mark two anniversaries: “I want to celebrate the 20-year Fashion Cares milestone and also Lila’s 10 years of chairing the event. As you know, Lila is so committed to fundraising for these charities. I love Lila. She has become one of the most important people in my life and I hope she feels the same way about me and I hope that plays a part in what keeps her returning year after year.”

Adds Hertz: “It’s a way of combining my passion for raising money for these two causes with my passion for beautiful clothing and accessories. I don’t think you could find a better fit for me. I love it. I just love watching Jeffrey and his team dress the models and the fashion show itself is so terribly exciting. I always look forward to it and heave a sigh of relief that everyone has fun. I worry about the details. I just want to deliver a really fun product to the public so we can continue to support these charities and our community.”

For tickets and more information on the August 27 20th Jeffrey Fashion Cares Atlanta, go to the event’s official website. 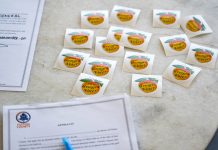