Home News & Opinion From the Magazine Ten best books of 2013 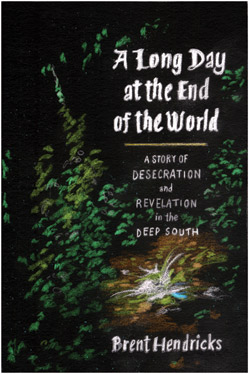 A Long Day at the End of the World
Brent Hendricks
Farrar, Straus & Giroux
Poet Hendricks’s haunting memoir traces his pilgrimage to the Tri-State Crematory in North Georgia, where his father’s corpse was among more than 300 uncovered in 2002 in a macabre real-life mystery.

March: Book One
John Lewis, Andrew Aydin, and Nate Powell
Top Shelf Productions
A civil rights legend joins the ranks of superheroes in his own memoir–as–graphic novel—the first of a planned trilogy—designed to introduce a new generation to the story of how nonviolent crusaders triumphed over the forces of evil.

Dirtyville Rhapsodies
Josh Green
Parkgate Press
These eighteen tightly plotted stories are a little unsettling and completely intoxicating, chock-full of dark, dark humor. One great line: “Like any American city, Atlanta’s a juxtaposition of affluence and despair, knocking into itself.”

Henry Darger, Throwaway Boy
Jim Elledge
The Overlook Press
Outsider artist Darger has long been vilified as a pedophile, a sadist, or a serial killer—or all three—based solely on the horrific content of his paintings. Elledge spent more than a decade uncovering a much more nuanced, tragic life story.

Eat Drink Delta
Susan Puckett
The University of Georgia Press
This immensely satisfying book by the longtime Atlanta Journal-Constitution food editor (and current Atlanta magazine columnist) is an unforgettable ramble through the soul of the Mississippi Delta—possibly the most Southern place on earth.

Mrs. Poe
Lynn Cullen
Gallery Books/ Simon & Schuster
The author of The Creation of Eve and Reign of Madness once more strikes the perfect balance between period detail and original storytelling, in a fictionalization of the irresistible love triangle of Edgar Allan Poe, his wife, and his mistress.

Island Time
Jingle Davis, with photographs by Benjamin Galland
The University of Georgia Press
Veteran journalist Davis tells the spellbinding history of Saint Simons Island and pays tribute to the colorful characters who continue to protect all eighteen square miles of its fragile majesty.

Someone Else’s Love Story
Joshilyn Jackson
William Morrow
The irrepressible Jackson’s sixth novel begins in a North Georgia convenience store and spins from there into unexpected arenas of fate and faith. One great line: “I fell in love with William Ashe at gunpoint, in a Circle K.”

Pickett’s Charge
Charles McNair
Livingston Press
McNair unleashes a rollicking tale of Threadgill Pickett, whose picaresque quest to kill the last Yankee serves as a metaphor for Southern unease. One great line: “For an instant, dreamy voices and memories spun around the room, a gossamer of gunsmoke.”