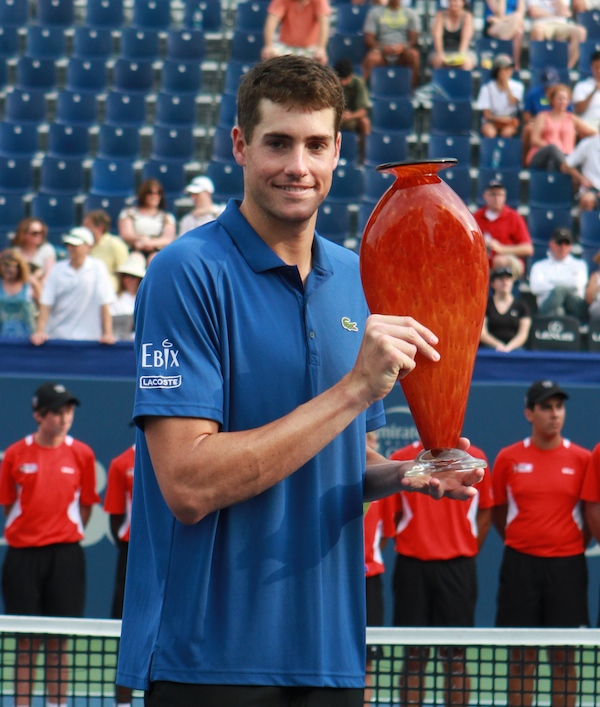 After Sunday’s finals singles match, the Atlanta Open crowned a new champion: John Isner. Isner, twenty-eight, is a 2007 graduate of the University of Georgia, and as a senior, led the Bulldogs to an NCAA National Championship. Isner is currently the highest-ranked male American tennis player, coming in at twenty. His opponent from Sunday’s championship, South African Kevin Anderson, is ranked twenty-one.

Isner and Anderson have been friendly competitors since college, where the two faced off for the first time. Both men have similar playing styles (powerful serves, tendency to end points quickly) as well as similar builds: Isner stands tall at six-ten as does Anderson at six-eight. Sunday’s match was the “tallest final” recorded in the ATP Tour’s history. But Isner’s used to racking up offbeat statistics like that. In 2010, he played the longest match in professional tennis history, defeating Nicolas Mahut in eleven hours and five minutes over the course of three days at Wimbledon.

At this year’s Atlanta Open, Isner defeated veteran Lleyton Hewitt of Australia to earn a spot in the finals, while Anderson advanced to the championship after putting an end to Ryan Harrison’s hot streak. The championship match, neck-in-neck for nearly three hours, ended in an intense tiebreak where Isner was able to find his next gear. Of the final set’s tiebreak, Isner said: “My last serve of this tournament was 146 miles an hour. I had a lot of adrenaline going through me, and once I got that little lead, I held on.”

By the way, while we’re still tallying Isner-related stats: his 146-mile-an-hour serve was the fastest serve recorded during the tournament.

“The crowd certainly played a huge role,” Isner said. After admitting he hadn’t played his best tennis in the first set, Isner credited the crowd. “It’s tournaments like this where I have support like that…it helps me so much and I want to do my best in front of the fans who are cheering me on.”

After thanking everyone from his parents to his chiropractor to UGA head coach Manny Diaz to his dog, Isner held up his trophy for the first time in Atlanta. Should we expect him back in town next summer? “I’ve played this tournament for four years now and it would be weird if I didn’t come back and try to defend my title,” he said.