Home News & Opinion Hollywood of the South The Walking Dead Awards: To kill or not to kill? 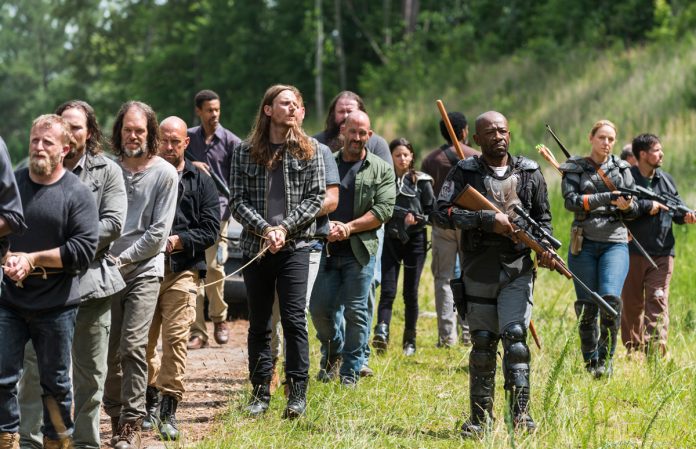 Each week, we comb through the guts of The Walking Dead, much like a horde of hungry walkers, to bring you the episode’s best moments, surprises, and other post-apocalyptic curiosities. This week: Only a fool would meet the M2 Browning machine gun on an open field.

Most anticlimactic death: Seriously? Eight years of memes, a cliffhanger episode ending, and then Daryl emotionlessly ends Morales with a single blow? What was the point of bringing him back at all?

Worst memory: Rick tells Morales that he’s lost Lori, Shane, Andrea, and Glenn since the two last saw each other. No mention of T-Dog or Dale though.

Trouble in paradise: Twice tonight we saw Daryl coldly put down Saviors when Rick expressed a desire to find another solution. Could a rift be forming between the two?

Most prepared: It’s a good thing our heroes brought all that rope for a garrison’s worth of Saviors. That’s thinking ahead.

The. Worst: Just when you thought Gregory couldn’t get any worse, after he drove Gabriel’s car back to the Hilltop and literally begged and pleaded with Maggie for mercy and forgiveness, we find out from helpful Hilltop guard Kal that Gregory once ate a child’s sorghum pancakes. Seriously? This guy needs to go.

Tasty: For the curious, here’s a recipe for sorghum pancakes. They’re gluten free!

Most confusing decision: Maggie lets Gregory back in into the Hilltop because he isn’t worth killing—fine. But letting him greet people at the gate? Not even follow-up on his assertion that he just “found” Gabriel’s car? Maggie. This man is not trustworthy. Why are you putting trust in him?

Most in need of help: Looks like Morgan has recognized that he’s gone a bit crazy, once again. Can anyone recommend a cheesemaker and/or goat in the DC metro area?

The king is dead? The last moments from this week’s episode had us wondering if King Ezekiel will survive that hail of machine gun fire. The prognosis from next week’s promo isn’t good—it features Ezekiel’s voice-over prominently. Hopefully that’s just a red herring.

Best rescue: When Daryl and Rick were escaping the Savior compound, it looked as though little Gracie—found helplessly sleeping in her crib in the last episode—was destined to be a walker snack. Thankfully Rick scooped her up after the building was cleared and handed her off to a grieving Aaron, who volunteered to take her to the Hilltop for safety.

Worst trope: Even though we knew it was coming, there’s nothing worse than a machine gun opening fire on our heroes while they’re milling around in an open field near a yet-to-be-secured enemy outpost.

Best line: “We’re two assholes who’ll do whatever we have to just to keep going. And the only difference is I’m the one holding the gun.” —Morales

Most disturbing image: It’s been awhile since a zombie blood-splatter coated the camera. Gore fanatics will love this episode—and the grotesquely deteriorating walkers. How long until they’re just piles of wiggling bones?

Least disturbing image: It’s hard to take the gore and gross-outs seriously when walkers begin to roll lackadaisically down a hill. Weeee!

Best kill: None. Honestly this week had us asking, “Why did you do that?” to many of the kills. And since a major theme was civility in war, it seems wrong to award a best kill this time.

Episode MVP: Rick, for trying to bring some humanity to this war. He didn’t want to kill Morales. He offered to let the Savior who gives them the intel about the moved guns walk free. Daryl killed both without hesitation, but Rick tried to see the greater good.