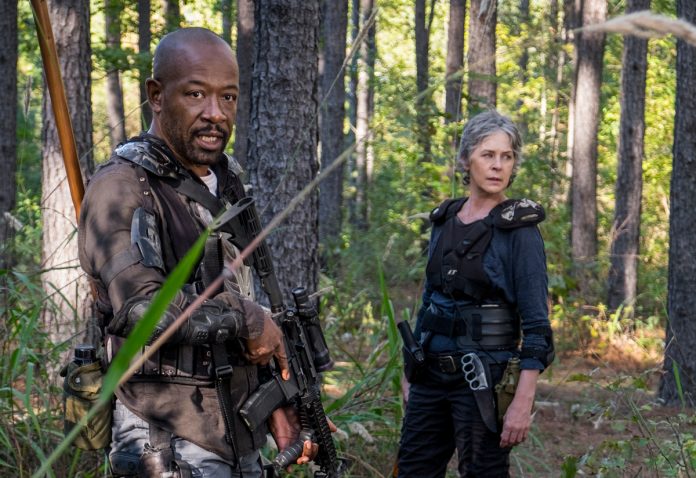 Mia Culpa: Alright, we’re just going to come out and say that we were 100 percent wrong about Jadis and her community. In the last few weeks, we’ve learned that she can speak in full sentences, is not crazy, can go toe-to-toe with Negan, and has an awesome zen container home.

Hardest to peg down: And speaking of Jadis, we’re really struggling to see where she fits into a post-Negan world. At first we thought she’d be an original big bad, then we thought she’d lead us into the comics’ Whispers, and now we’re wondering if she’ll take the place of Carl for the Silence of the Lambs-esque jail cell chats with Negan that occurred in the comics.

Most attentive: During the last few episodes, there have been a bunch of callbacks to seasons one through three. We’re not sure who’s been reading the TWD wiki, but we’re glad they are.

Good news: Tara hasn’t died, which means the arrow that sliced her wasn’t tainted and Dwight isn’t a traitor. And as a bonus, Tara doesn’t want to kill him anymore. Now if only Daryl could come around.

Best origin story: We learned in this episode that Negan’s beloved bat is named after his dead wife and he considers it the last piece of her he has left. While the amount of affection he shows toward the weapon is less weird now, it’s still pretty morbid that he assigned his wife’s memory to an instrument of murder.

Biggest question: Seriously, what is the helicopter? And how does Jadis know to signal it?

Second biggest question: Who did Negan pick up? Our money’s on Laura, the only Savior who knows that Dwight flipped sides.

Best outcome: We’ve been joking for weeks about how every kid Carol influences dies, but in this episode, Carol tearfully saved a lost Henry from a group of walkers and brought him home safely. Maybe this finally breaks the curse?

Most awkward moment: Not sure what kind of reaction Morgan was expecting from Henry after telling him that he killed the man who killed his brother, but something tells us that wasn’t it.

Death watch: Rick and Michonne said “I love you” to each other, which has to confirm our theory that Michonne isn’t long for this world. No couple is ever allowed to be happy in this universe.

Best exchange:
Morgan: “You can’t save the dead, Carol.”
Carol: “You’re not dead.”
Morgan: “I know. I don’t die. I just see it again and again. Again and again. Even when I look away, I still see it.”

Most disturbing image: Rick and Morgan killing everybody in cold blood. Have you learned nothing from Carl?

Best kill: Filler episodes. We’ve noticed a pick up lately in quality. Yeah, we know the season’s winding down and that ramps up the excitement, but seriously, we’re glad to have a break from do-nothing episodes.

Episode MVP: Negan, for continuing to be one of the show’s most interesting characters. He could have burned Jadis’s photographs. He could have killed her; Rick certainly would have if he’d been tied up like that. But Negan didn’t. He apologized for what Simon did to her community. He offered her a place with the Saviors. Negan can be ruthlessly cruel, but moments like this when we see his humanity are what make him such an excellent villain.