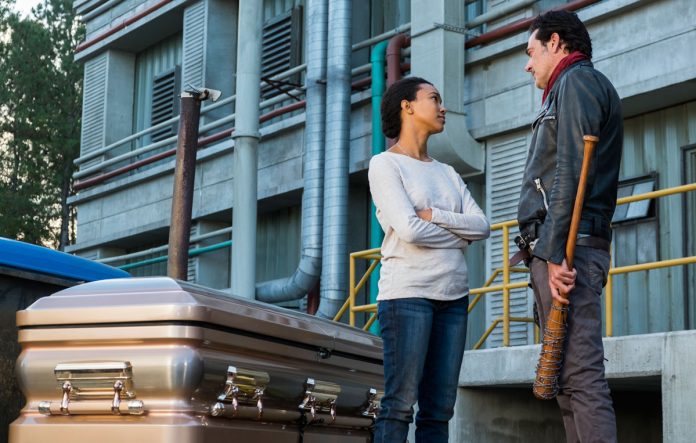 Each week, we comb through the guts of The Walking Dead, much like a horde of hungry walkers, to bring you the episode’s best moments, surprises, and other post-apocalyptic curiosities. This week: Abraham eats a snake, Shiva eats a Savior, and Negan eats crow.

Biggest 180: Yes, we get that Dwight killed Denise and that gives Tara an obvious ax to grind with him. But after such a level-headed turn at Oceanside, shouldn’t she realize that maybe, just maybe, he might have some serious worth as a Sanctuary mole and maybe she should stop telling Daryl to kill him over and over? C’mon, Tara, you know better.

What goes around . . . “Punishment is how we built everything we have,” Negan growls while talking to Sasha about the importance of the concept. For a guy that loves punishment so much, we cannot wait to see what’s in store for him when he finally loses this war.

Most verbose zookeeper: Ezekiel sure knows a few ten-dollar words, doesn’t he? Good skill for a king.

Best continuity: At somewhere between 14 and 16 years old, that iPod is positively ancient by today’s standards, but it would have been a more spry seven to nine years old back in 2010 when the show started. Not terribly outlandish to find one if there were a zombie apocalypse.

Biggest question: What the hell happened to Gregory? The show didn’t just forget he went running to the Sanctuary; Maggie references it as she plans to head into battle. But we didn’t see what became of that. Guess he showed up while Negan was out to lunch.

Biggest question for comic readers: While a group calling themselves the Scavengers appeared in the comics, they were very different than the traitorous group we’ve been referring to as the Garbage Pail Kids. Essentially, they were the Wolves, filling a similar role around the same time period. Jadis is an original character to the show, and her group’s betrayal, nomadic lifestyle, and disappearance put them on deck to easily fill the shoes of the post-Negan Big Bad, the Whisperers.

Best negotiator: Sasha, who had Negan so wrapped around her finger that she was able to talk him into agreeing to kill only one of her friends, rather than his preferred three.

Worst negotiator: Jadis, who backs off immediately on her request for 12, not 10, guns. Just like with Rick, she doesn’t even try.

Blink and you missed it: Daryl first encountered ceramic figures like the one he found by the gate in Dwight’s room during his escape. Seems like Dwight didn’t know about the betrayal and is still on Team Kill Negan.

Best couple: Does anyone else think Carol and Morgan would be good for each other? They both have had similar bouts with murder and pacifism, after all. Plus she kills kids, and he goes insane when kids die. Opposites attract!

Best finale: After the season six cliffhanger that enraged a thousand fans, this season’s finale not only provided plenty of closure, but felt like it could have been a suitable series finale. And even though unlike Abraham we didn’t get to see Glenn in this episode, Maggie’s speech attributing the group’s existence to his choices—and clutching his watch in the final scene—was a perfect tribute to the show’s fallen comrade.

Best line: “You ever hear the one about the stupid little prick named Rick, who thought he knew shit but didn’t know shit and got everyone that he gave a shit about killed? It’s about you!” —Negan to Rick

Most disturbing image: Eugene saying “I am Negan” to Rick. Even after the last few weeks, we were still holding out for the long con. Honestly, we’re still waiting for it. But hearing the mullet-crowned Chief Engineer profess loyalty to Negan directly to Rick, ouch, that one hurt.

Best kill: Sasha’s suicide. Was it pretty obvious that it was coming? Yes. Between this season’s thoughtful character arc, the extremely sentimental flashback with Abraham, and the fact that she’s the lead in a new TV show, anyone with half a brain put hedged their bets on Sasha biting the dust in the finale. But that didn’t make it any less incredible when the Walkerfied Sasha lunged at Negan’s throat. Now that’s a way to bow out.

Episode MVP: Shiva. Not only did she effectively save Carl’s life by lunging into action just as Negan began to swing Lucille toward his head, she looked snazzy and pretty realistic while doing it. And she somehow managed to survive being a enormous killer tiger in an arena where everyone was armed with a gun. That’s impressive.

And in a perfect bookend for Season 7, as with the season premiere, our Rick Grimes Crazy-O-Meter was overloaded when we fed the data into the computational matrix. We then tried setting SCE to AUX and got the craziest possible reading yet:

See ya next season!