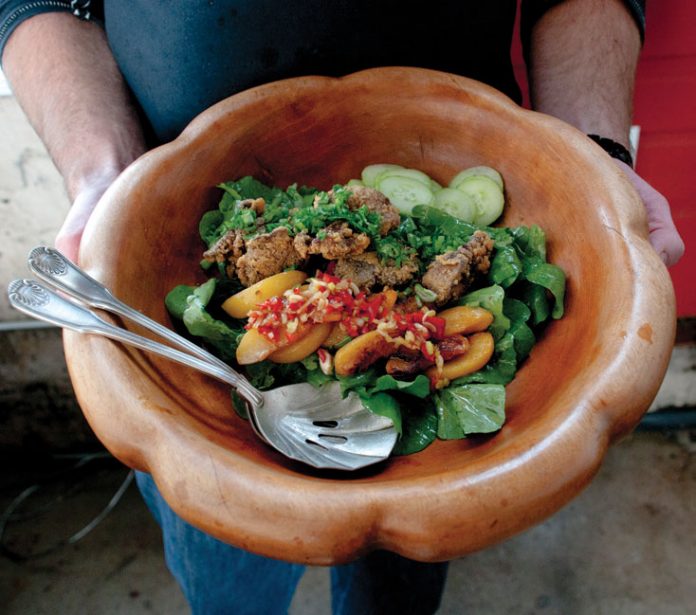 David Sweeney—lunch and catering chef at the Bakery at Cakes & Ale—is best known for the stunning salads and vegan creations he served at his still-missed Old Fourth Ward restaurant, Dynamic Dish, which closed in 2010. He was born in Fort Gordon, Georgia, but his military family moved to Europe when he was young, and he lived there for nearly three decades. Sweeney moved back to the States in 2005 when his grandmother—Dorothy Cowart, whom he called “Memaw”—became ill; she passed away soon after. As an ode to her, Sweeney devised a summery salad using three of her favorite ingredients: chicken livers, peaches, and Vidalia onions. It was Cowart who taught him to love chicken livers, which he cooks in an heirloom cast-iron skillet like she did. This serves two as a substantial entree or four as an appetizer course.

2. Remove peaches to a glass bowl and refrigerate, covered, for at least 3 hours. Bring remaining poaching liquid to a low boil until reduced to about  cup. Strain out peppercorns and coriander seeds, and set the syrup aside in a bowl. When cool, whisk in mustard, lemon juice, olive oil, and pepper to taste.

3. Cut each peach half into four even slices. Heat butter in a saute pan over medium heat. When bubbly, add peach slices, flat-side down, and saute until golden brown on both sides, turning only once. Remove and set aside. Immediately toss the peppers and the white part of the Vidalias with a pinch of salt in the remaining butter to soften slightly. Turn off heat, leaving pepper mixture in the pan.

4. Place the arugula in a large bowl. Toss the cucumber slices with vinegar and salt in a small bowl.

5. To prepare livers: Remove excess tissue and thin outer membrane from livers; place livers on a clean cloth. In a shallow bowl, combine the cornmeal, flour, paprika, salt, and pepper.

6. Beat the egg in another small bowl. Have a paper towel–lined plate ready to drain the fried livers.

7. In a heavy skillet, gradually heat oil until a pinch of the dry mixture sizzles. Dip livers into egg, toss them in the dry ingredients, then place them one by one into the hot oil. Fry about 2 to 3 minutes per side, turning with a slotted spoon. Once cooked, drain on the paper towels and salt lightly.

8. Finish salad: Toss the arugula with about one-third of the vinaigrette (reserve the rest for a salad at another meal). Divide the greens among two or four plates. Arrange the peaches and livers over the greens and the cucumbers along the side. Top the peaches with the pepper and Vidalia mix, and garnish livers with remaining raw Vidalia greens.