Home Uncategorized The chef who changed my relationship with food

Few chefs have had as big an influence on the way I eat as David Sweeney. His innovative Edgewood Avenue restaurant, Dynamic Dish, may have lasted a scant three years—from 2007 to 2010—but it earned a place in the city’s pantheon of meaningful dining experiences. Before Dynamic Dish, healthy eating in this town felt like something one did for virtue more than pleasure. But the food there—creamy kohlrabi soup with freshly grated horseradish, young kale salad scented with cumin and sweetened with Medjool dates—had the kind of exquisite purity that I, so far, had only experienced in extreme fine-dining.

If Sweeney were to start a cult in northeast Georgia, where he now lives, he would find plenty of followers, myself included. Born into a military family in Augusta and raised all over the place, mostly in Europe, Sweeney spent more than half of his 51 years in Germany, where he worked in luxury retail (Ralph Lauren, Escada, Gucci). His lifestyle (he has a confessed fondness for Beluga caviar and Champagne) changed dramatically in the early 1990s, when his partner in London tested HIV-positive. In the wake of that event, the idea of achieving optimal health through the best-possible food took root in his brain. He taught himself all he could learn about the nutritional value of nearly every ingredient.

For a while, Sweeney volleyed between the world of fashion and the world of health food. He had already launched two vegetarian catering companies in Germany when something forced his hand: His grandmother in Florida got sick, and he moved back to the States to take care of her. After she died, he opened a restaurant in Atlanta, a city he viewed as suitably progressive for his cooking and concept. Even so, Dynamic Dish’s minimalist design, communal seating, and refined, mostly vegetarian menu asked a lot from customers of that era.

For all the passion it elicited, the restaurant never gained enough of a regular following. After filing for bankruptcy in 2010, Sweeney earned a living catering events ranging from vegan society weddings to intimate dinners for his fan base. Then, in 2016, he packed up his city life for a rural one and took a six-month stint as executive chef at the Red Barn Cafe, open seasonally and attached to a winery at the foot of Rabun County’s Tiger Mountain. When the season ended, Sweeney opted to stay put.

Sweeney’s latest project, a line of healthy snacks called David’s Seedy Bars, is perfectly in line with his moral imperative to serve food beneficial to his customers’ health. (His favorite joke: “I used to hang out in seedy bars; now, I make them.”) The bars supply fiber and good fat, and, unlike most other ones marketed to the sports crowd, they cause no spike in energy. The recipe has evolved quite a bit over the past year, but the ingredients (pumpkin, amaranth, and sunflower seeds bound by brown rice syrup) haven’t. The line also includes pseudo-cereals (amaranth and other seeds sweetened with coconut sugar) that you can (and should) sprinkle on yogurt; amazingly delicious dehydrated kale crackers; and vivid schmears and pâtés crafted from turmeric, sprouted seeds, tahini, organic lemon juice, and other raw ingredients.

How has Sweeney changed my life as an eater? By refocusing my attention on the beauty of simplicity. This was true back when I came under the spell of Dynamic Dish, and it remains true today. As I wrote in my 2008 review of the restaurant, when I took the unusual step of accompanying the chef on a trip to an urban farm: “While gingerly loading the crops into a cooler, Sweeney told the grower that his customers could ‘feel the [positive] vibration’ of the ground when they ate the just-harvested vegetables.” Among Sweeney’s many enduring talents is his ability to select perfect produce: If he hands you an avocado, a sweet potato, or a mango, it is likely to be the best you’ve ever eaten.

You can usually find Sweeney’s products at the Freedom Farmers Market near the Carter Center or at Floral Park Market on the Westside. 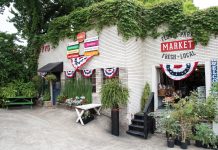