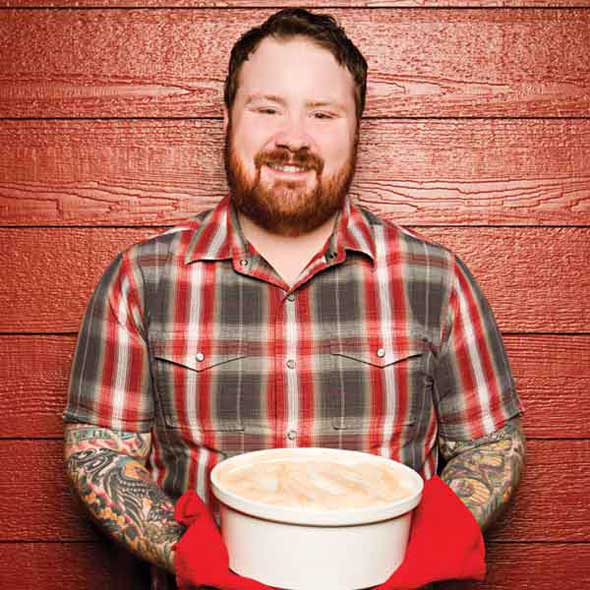 Born and raised about forty miles south of Atlanta in Locust Grove, Woodfire Grill’s Kevin Gillespie learned to cook by watching his paternal grandmother prepare gargantuan smorgasbords of humble South Carolina Appalachian fare for an army of relatives who wandered in and out of her house daily. Many of those dishes appear on his restaurant menu in more refined interpretations today: fanned slices of duck breast over field peas, sweetbreads garnished with chowchow relish, cornbread baked in cast-iron skillets seasoned with sizzling lard, and stewed rutabaga to accompany braised pig’s jowl and collard greens.

Recently, though, he has been on a quest to revive a banana pudding recipe made famous by his maternal great-grandmother. It differs from the standard boxed-mix-and-Cool Whip versions in two key ways: It is typically served warm, with a meringue top, and the velvety custard and banana slices are layered with pound cake slices instead of vanilla wafers.

“I only have one clear memory of the pudding—and it has stuck with me more than twenty years,” says Gillespie, in the Tabasco-red kitchen of his restored East Atlanta bungalow. “Every Thanksgiving, about a hundred relatives would come from all over, many bringing covered dishes. Part of the tradition was that a big pan of banana pudding—enough to feed about fifteen people—would be hidden somewhere in the house. Everyone would wander around the rooms looking for it, and whoever found it got to eat the first helping. One year, when I was about seven, I opened a cabinet to get a water glass and there it was. But I misunderstood the rules. I thought if I found it I got to eat the whole thing. And that’s what I did. My uncle caught me on the couch with an empty pan in my lap.”

The exact family recipe was never written down, so Gillespie re-created it from memory, adding his own touches like using fresh vanilla bean and adding coffee to the custard. “This recipe is full of steps that will make you think you’ve done something wrong,” Gillespie says. “But if you follow the instructions, it will work just fine.” The recipe could easily be cut in half for a smaller crowd.*

Instructions
1. To prepare custard: In a 3-quart saucepan, combine milk, half-and-half, and vanilla bean. Scald mixture over medium heat until bubbles just begin to appear around the rim, then pull it off the heat. Meanwhile, in a large bowl, whisk egg yolks and sugar until thoroughly blended. Add flour and salt; whisk until it combines into a clump. Scrape the seeds of the vanilla bean into the milk mixture and remove bean. Add about 1/4 cup of the milk mixture into the egg/sugar/flour butter mixture, whisking, to temper it. Continue adding milk mixture in 1/4-cup increments until it’s the consistency of pancake batter, and then add remaining mixture all at once.

2. Cook and stir mixture with a wooden spoon over medium heat, scraping bottom and sides frequently, until mixture resembles scrambled eggs. Remove from heat and whisk vigorously; don’t worry if some lumps remain. (To ensure a smoother texture, press through a sieve.) Whisk in sour cream and coffee, and then blend in butter.

3. To assemble: Cut pound cake into 1/4-inch-thick slices. Peel and slice bananas 1/8-inch thick. Pour a thin layer (about 3/4 cup) of the pudding into the bottom of a deep, 4- to 5-quart casserole dish or Dutch oven. (Alternately, use two 2-quart dishes.) Cover completely with a layer of pound cake slices, then with a layer of banana slices. Mash down with your hands to seal. Add half of the remaining pudding, then another layer of cake, and then another layer of banana slices. Mash down again. Cover with remaining pudding.

4. To prepare meringue: Preheat oven to 400°F. In an electric mixer, beat egg whites with sugar and cream of tartar until in between soft and medium peaks. Fold in vanilla and almond extracts. Cover pudding with a thick layer of meringue. Bake 8 to 12 minutes, or until golden brown. Pudding is best served warm, but it is delicious cold as well.

Gillespie’s Tips for Success
1. The trickiest part of this recipe, Gillespie says, is finding perfectly ripe bananas. If they are underripe, they will have a grassy taste; if they are too ripe, they will be mushy. He recommends buying bananas three days ahead of making the recipe, when they are slightly green, so that they develop tiny, black speckles.

2. Scald milk just below the boil. Tiny bubbles should just begin forming around the inside of the saucepan.

3. To scrape a vanilla bean into a pot of liquid, hold one end of the pod, push it against the side of the saucepan with the side of a fork, and scrape the seeds into the milk mixture.

4. Thickening pudding with cornstarch gives a glossier appearance, but flour gives the pudding more structure and also a velvety texture that Gillespie prefers.

This is an extended version of an article that originally appeared in our May 2011 issue.