From Screen Doors and Sweet Tea by Martha Hall Foose

In the summer of 1953, my then elementary-school-age mother, Cindy Vaughan, and great aunt, Carrye Vaughan Heard, attended the dedication of a memorial to Casey Jones. The wreck of #382, a coal-fired freight train, has become an American folk tale from the Industrial Age. John Luther “Casey” Jones made his famous final run on April 29, 1900, and we all know it ended badly. My family members were attending the ceremony to represent the Vaughan family. My great, great, great-grandfather, Major Henry Vaughan, granted a right-of-way for a railway through the area in the 1830s in exchange for the promise of a depot.

The tale of the hot summer day has been told for years. That day my mother met the former Jane Brady, Mrs. Casey Jones. The eighty-one-year-old red-headed widow was overheard by just about everyone, saying about the master of ceremonies, “Tell him to sit down and shut his damn mouth! It’s hot as hell out here!”

This refreshing, cool dessert doesn’t require any baking so it is great if you can’t stand the heat.

Notes:
– Just about any combination of stone fruits and berries works here. Do watch the amount of strawberries, which can make the pudding too watery.
– The berries can be cooked in the microwave if it is too hot to even turn on the stove.
– Challah or egg bread can be used in place of the white bread here.
– This old-fashioned dessert can be served with sweetened whipped cream or sherbet on top to add a creamy element.

Instructions
1. In a medium saucepan over medium heat, combine the raspberries, blueberries, strawberries, and sugar. Cook and stir for 5 to 7 minutes, or until the berries are juicy but still recognizable.

2. Line a 2-quart bowl with plastic wrap. Line the bottom and sides of the bowl with slightly overlapping slices of bread. Then repeat the overlapping in the opposite direction.

3. With a slotted spoon, layer the berries and bread in the lined bowl, making three layers. Top with a layer of bread. Stir the liqueur into the remaining juice from the berries. Pour over the final bread layer. Press plastic wrap over the surface of the pudding. Place a dish or pan directly on the pudding to weight it down. Set two 1-pound cans on top of the dish. Refrigerate for 24 hours.

4. When ready to serve, invert the pudding onto a platter with a rim to catch the juices. 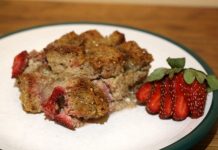 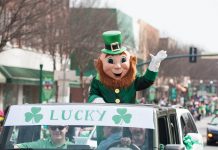 Celebrate St. Patrick’s Day in Our Very Own Dublin, Georgia