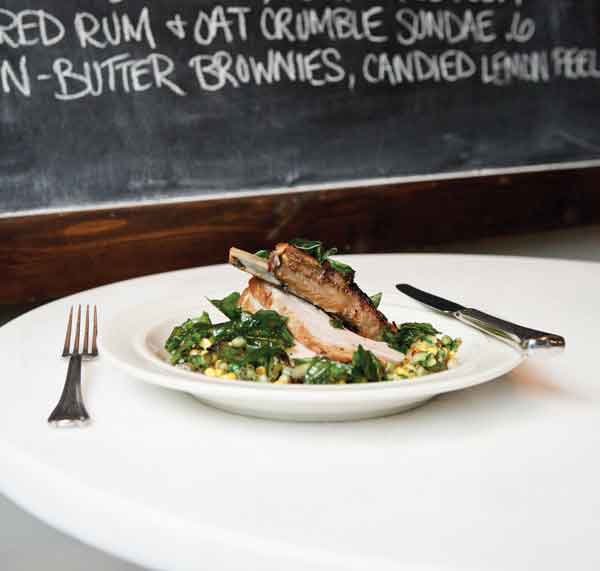 A few bites into the fried okra brimming out of a paper cone, I relaxed; the move to larger, tonier digs on the southeastern edge of Decatur Square had not unhinged Cakes & Ale’s personality. Stubby little purple okra pods sheathed in crackly batter popped with the same playfulness I remembered from Septembers past. So did the menu’s only mainstay: arancini, two-bite spheres of fried risotto stuffed with melty sheep’s milk cheese.

These gateway snacks ushered us into the latest brainstorms from chef-owner Billy Allin: scallops nestled among cracked wheat and minced cucumber over a slick of herbed yogurt; silky tagliatelle tossed with crème fraîche, dill, and orange trout roe; mild swordfish with tapenade and a brothy vegetable stew that evoked Moroccan tagines. Included among the starters was “David’s eggplant, miso, and ginger soup,” a carryover of the potage served at lunch that day by the brilliant David Sweeney, who previously ran Dynamic Dish and now cooks Tuesday through Friday at Cakes & Ale’s new bakery next door.

Relocation alters a restaurant’s destiny. Bacchanalia moved from its charmingly rickety cottage in Buckhead to a sturdy industrial redo in Westside and grew tenfold in prestige. Brasserie Le Coze, a grand beacon of civility in Lenox Square, took its painted tiles and its skate wing in brown butter and reinvented itself as French American Bistro (FAB) Downtown. It has never quite recaptured the original frisson.

It’s almost unnerving, then, how similar the warmth of the new Cakes & Ale feels to its storefront that opened in 2008 a few blocks away on West Ponce de Leon Avenue. The chalkboard that lists the night’s dishes again holds its place of prominence on the left wall by the entrance. Locals who loved the drop-in air of the bar—and the Old World–heavy wine list with its dozens of standouts by the glass and carafe—regrouped immediately at the longer but no less welcoming counter. There are two rooms instead of one, and more picture windows now frame the space, but Seiber Design duplicated the same glow of dusky twilight that gave—and gives—the restaurant an unexpected, big-city moodiness.

Most importantly, the food remains gloriously idiosyncratic. Billy Allin was an investment banker, working for the family business in Greenwood, South Carolina, before he and his wife, Kristin, moved to San Francisco. He leapt into the cooking life by working for a year as an intern at iconic Chez Panisse in Berkeley. Later, when the Allins decided to move to Atlanta, Billy’s resume impressed Scott Peacock, who hired him at Watershed. He worked there for three years as a sous chef. Peacock said to him, “We’re cooking simple food, but not simplistic food.” It was a mantra that Allin internalized.

It’s hard to categorize Allin’s inquisitive, globally influenced style, but his individuality is what makes Cakes & Ale a destination restaurant. I know to expect pristine ingredients, but I can never predict what he’ll do with them. Thinly sliced radishes, pears, and celery atop arugula play off each other joyfully, like gospel singers trading vocal riffs. They don’t even need the gorgeous slice of Rogue River blue cheese beside them. On Allin’s plates, fruits and vegetables carry their own weight.

He is most lyrical, though, with the ways in which he interweaves meats and produce. He has always evoked Italy best with his pillowy, ephemeral gnocchi, but recently he paired them with their finest mate yet—a minced rabbit ragu that shook the senses with its herbaceous thwack of rosemary and summer savory. He did his Southern roots proud with a duo of pork ribs, the meat barely clutching the bones, and rosy slices of pork loin over corn puree. Roasted corn, okra, shell peas, and mustard greens deep-fried to a translucent crisp all came scattered around the pork, a summer-fall harvest feast that tasted so effortless and right—simple but not simplistic.

Very rarely, Allin produces a dish that reminds me of a skilled but eccentric home cook who goes awry in his experiments. A recent dish of blistered shishito peppers tossed in a tomatoey broth with seafood was one of those misfires. I tried it made with shrimp and with squid; in both cases the acidic tomato clashed with the peppers’ vegetal nature, and the seafood didn’t bridge the discord. Such dishes never stay around long.

Cynthia Wong, the opening pastry chef, left shortly before the restaurant relocated and took the celebrated phatty cakes with her to Empire State South. Cakes & Ale’s dessert program, while in transition, lacks the charisma of Allin’s savories. A stunning torte layered in chocolate ganache, salted praline and almond buttercreams, and two kinds of cake impressed with its intricacy, but the frank hominess of a lemon icebox cake with peach preserves and a sundae with buttered rum ice cream and oat crumbles came off a tad dull.

For now your sweet tooth will be better served if you arrive earlier in the day at the bakery next door. A huge painted wall sign for “Mrs. Teele’s Home Bakery,” covered over ages ago but discovered and restored during renovation, imbues the sunny space with a mystical sense that the Allins were fated to sell breads and baked goods here. A growing selection of croissants, cakes, cookies, and pastries is slowly rolling out from a new team of bakers. There have been hits and misses, but I’m an early fan of the peanut sandwich cookie, the delicate linzer cookies, and the olive stecca—focaccia’s saltier, more unctuous older cousin. The staff pulls a mean macchiato to accompany your nibbles.

But David Sweeney is the real reason I’m already a regular at the bakery. Sweeney, a humble man with an enigmatic smile, inspired near-religious devotion with his intense, clean-flavored vegetarian whimsies at Dynamic Dish. If you’ve ever glanced at my Twitter feed, you know I’m a card-carrying member of the cult. Dynamic Dish closed last November, and Allin and Sweeney bonded, naturally, while buying organic vegetables at local farmers markets. Sweeney will move into the back kitchen eventually, but for now he cooks lunch from a corner of the bakery counter, orchestrating ingredients into symphonic salads and sandwiches.

I’ve been particularly mesmerized lately by a salad of sauteed oyster mushrooms, their warmth and whiff of tamari offset by the coolness of sliced avocado, tender baby mustard greens, pickled daikon, and toasted almonds. Anyone who complains about the prices (entree salads can cost up to $13) should try the sublime $7 grain bowl, usually made with quinoa, field peas, feta, and a rotating cast of diced vegetables. It’s surprisingly filling, and, like all of Sweeney’s food, it’s nourishing. And while I frequently leave restaurants sated, I rarely depart them feeling nourished.

When I try to articulate thoughts like this to Sweeney, he just smiles and nods sagely and then suggests that I order some rosemary monkey bread from the bakery case for dessert. —Bill Addison

Photograph by Christopher T. Martin. This review originally appeared in our November 2011 issue.