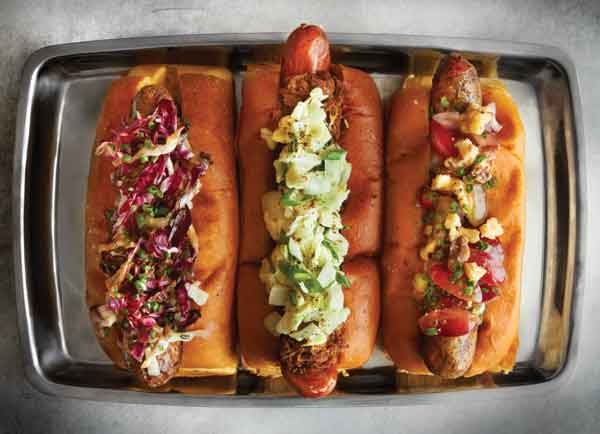 Richard Blais has become as much a brand as he is a chef. And no one can fault him for taking full advantage of the opportunities he’s cultivated after his celebrity-making turn on season four of Bravo’s Top Chef in 2009 and his winning performance on Top Chef: All Stars earlier this year. The fun, sometimes lovable, sometimes laughable burger mutants he oversees at two local Flip Burger Boutiques still stand out from the colonies of burger joints that have swarmed the city—thanks mostly to his esteemed name.

His newest experiment, HD1 in Poncey-Highland, gives similar multiculti makeovers to hot dogs. The crowds aren’t quite as eager (despite what some tastemakers may claim, hot dogs are so not the new burger), but the place will surely connect with the same audience that finds its thrills on a bun at Flip.

Atlanta hasn’t always been Blais’s most ardent booster. A graduate of the Culinary Institute of America, he arrived here in 2000 to helm Buckhead’s kitschy Fishbone & Piranha Bar. His coltish ideas—scallop and lemony hummus resting in a closed shell, striped bass over wasabi mashed potatoes and red wine jam—only hinted at the mad-scientist imagination yearning to express itself. Fishbone owner George McKerrow closed the restaurant in 2003 in favor of opening a Ted’s Montana Grill (he and Ted Turner are partners) on its Peachtree Road site. But McKerrow and his partners also invested in a restaurant that allowed Blais to introduce Atlanta to the jolting wonders of molecular gastronomy.

The self-named restaurant, Blais, situated among Buckhead’s then-flourishing club scene, remains one of Atlanta’s most unfortunate culinary flameouts. Somewhere in the thick of crispy chicken skins, gelatinized cubes of sweet tea and Tang, eyedroppers full of shrimp head sauce, and his unintended signature, the foie gras milkshake, Blais revealed plucky talent. “He cooks like he has faith in himself,” I said in a review at the time. He didn’t pull off every whimsy (no-go on the black olive ice cream, for example), but enough of it succeeded that I rooted for his vision. The restaurant closed unceremoniously in less than six months. Locals—and most Americans—never did find a place in their hearts for the science-nerd antics of modernist cuisine.

Blais moved through several respectable gigs for a few years, and I left the city in 2006. By the time I came back in 2009, the man was practically a civic hero. His Top Chef persona—the kitchen smarts, the lopsided grin and pointy jut of hair, the swings of confidence and self-doubt—brought him the adulation that his fine-dining and midscale cooking efforts never had. Traffic jammed and lines trailed in front of his newly opened burger joint in Westside. I sometimes wondered if Blais, ever the fan of foodie puns, didn’t name the place Flip as much for the cooking technique as for the change in public perception around him.

Ironically, now that we finally embraced Blais, he can be hard to spot around these parts, given his many out-of-town cooking demos, product development gigs, and endorsements with companies like McCormick. Next spring Blais plans to return to the kitchen full time—or at least much of the time—at the Spence, a restaurant he’s opening in Midtown in partnership with Concentrics Hospitality.

In the meantime, he and partner Barry Mills launched their long-discussed HD1 (HD is an abbreviation for Haute Doggery, the original name) on Highland Avenue near the end of September. Blais’s role in the restaurant is as more of a consulting chef, but the place thrums with his aesthetic. Design firm AI3 went the opposite direction of Flip’s white-on-white minimalism: At night the interior could pass as a back-alley bar in a Scandinavian city. Clean lines, dark wood panels, and a black concrete floor give it a slightly ominous beauty. It actually reminds me of the subdued color palette at long-gone Blais.

But this is not somber food. This is psychedelic state fair food. I can easily imagine Blais and Jared Lee Pyles (HD1’s executive chef, who has worked with Blais since 2008) spending hours brainstorming the world of cuisines—Moroccan, Italian, Cajun, Jamaican—that could fit between bread and on top of a sausage. You stare at a handwritten list of a dozen or so of these contrivances on the wall when you enter. You can order at the counter and wait for your food to be delivered to a table along the window or one of two long communal tables, or you can plunk down at one of twelve bar seats, where a server will hand you a menu.

Early in its run, the hot dogs—all beauties to behold—can be uneven in their balance of flavors. It doesn’t surprise, given the constant invention the kitchen strives for. The classic hot dog (made for HD1 by local charcuterie Spotted Trotter) with sauerkraut and mustard will quell the essential Americana craving: The dog pops satisfyingly with each bite, and the condiments accentuate the meat’s mild spices aptly. The Red Haute Dog sounds messy, with brisket chili, pepper jack cheese foam (so Blais), and Vidalia onion, but it stays manageable. Even with a crown of toppings, the ample bread somehow contains it all. The bun is a lighter form of brioche based on a West African recipe. It toasts handsomely. There’s so much of it, though, I usually end up leaving a third of it in a doughy heap.

Beyond these two traditional takes, look for ingredients that appeal and jump in. Chicken-apple sausage topped with herbed crème fraîche, grapes, and walnuts succeeds at evoking luncheon chicken salad. The gut bomb Kenturkey is the token Southern nod, heaped with bacon, clever tomato-pimento marmalade, Mornay (cheese sauce), and Parmesan. In that genre, I prefer the Eastbound & Down, a basic frank nestled with pulled pork, mustardy slaw, and barbecue sauce. Pyles made wise adjustments to the merguez (Moroccan lamb sausage) so it has fewer red currants and more minted cucumber relish, though it could still use a healthier dollop of thick yogurt. The Louisiana Lobster (aka crawfish) with mirliton salad and shrimp head aioli tastes flat—strange, given its pungent elements.

Something to nibble before the main event? The go-to favorite is waffle fries drizzled with “maple-oy,” a play on Malaysian Mae Ploy sauce with maple, soy, lime, and the chili sauce called sambal. Prawn dogs—shrimp battered in grits—remind me of the quality fried specimens you can find on Tybee Island. “Pigs in the sheets”—pulled pork in crackly phyllo dough—features a mango sauce that was devoid of all flavor when I tried it. Chicken wings riff on classic lemon-pepper seasoning with near-cloying lemon curd and (not enough) Sichuan peppercorn.

You get the gist, and you know right away whether you’re in or out with this kind of experimental guy grub. Canned artisan beers, a perfunctory wine selection, and cocktails that lean to the sweet side complete the picture. It’s a noteworthy addition to the restaurant scene because its stoner disposition laughs in the face of the economic gloom: This was the slowest autumn for new dining options in Atlanta I’ve ever witnessed. And HD1 is priced for the times: Most dogs cost between $5 and $6.50.

Still, I can’t help but miss the Richard Blais who took risks with broader, more substantial ideas, who composed real entrees. HD1 is fun for a quick, casual lunch or late-night snack, but I’m holding out for Blais’s genuine return to the stove. —Bill Addison

Photograph by Greg Dupree. This review originally appeared in our December 2011 issue. 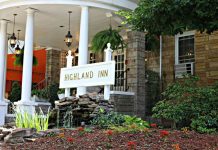