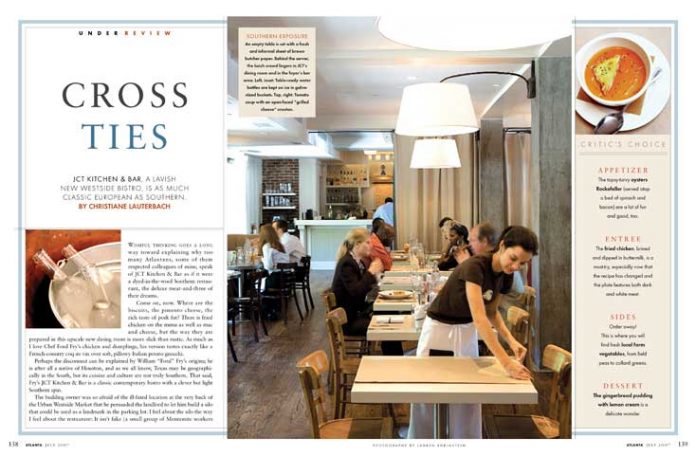 Wishful thinking goes a long way toward explaining why too many Atlantans, some of them respected colleagues of mine, speak of JCT Kitchen & Bar as if it were a dyed-in-the-wool Southern restaurant, the deluxe meat-and-three of their dreams.

Come on, now. Where are the biscuits, the pimento cheese, the rich taste of pork fat? There is fried chicken on the menu as well as mac and cheese, but the way they are prepared in this upscale new dining room is more slick than rustic. As much as I love Chef Ford Fry’s chicken and dumplings, his version tastes exactly like a French-country coq au vin over soft, pillowy Italian potato gnocchi.

Perhaps the disconnect can be explained by William “Ford” Fry’s origins; he is after all a native of Houston, and as we all know, Texas may be geographically in the South, but its cuisine and culture are not truly Southern. That said, Fry’s JCT Kitchen & Bar is a classic contemporary bistro with a clever but light Southern spin.

The budding owner was so afraid of the ill-fated location at the very back of the Urban Westside Market that he persuaded the landlord to let him build a silo that could be used as a landmark in the parking lot. I feel about the silo the way I feel about the restaurant: It isn’t fake (a small group of Mennonite workers came to erect it on site), but it isn’t quite the real deal, either.

Fry’s concept is impeccably clever. He worked for nine years as the executive chef of Eatzi’s, the now-closed upscale grocery and takeout shop, and he knows exactly how the local upper middle class lives—and what it likes to eat. Beautiful ingredients, none of them particularly rare, rich buttery flavors, and lots of fresh vegetables strike just the right note in an airy dining room that resembles a wine country inn or one of those fabulous Alpharetta home kitchens meant for entertaining.

Many of the dishes could be served at a tony dinner party. The crispy oysters Rockefeller, without the shell and with plenty of leafy spinach and bacon under (rather than atop) the oysters, show a sense of humor. The thin, nearly liquid shrimp-and-crab cocktail, formerly and more truthfully known as a “Bloody Mary,” exemplifies Fry’s modern ways. His white bean bruschetta with Georgia green garlic comes as a delightfully unexpected dip, served with thin rusks of country bread.

If you don’t count your calories, there are plenty of dishes, such as overwhelming truffle-Parmesan fries, listed as an appetizer, and slow-cooked beef short ribs with “pot roast vegetables,” that will fill you up. But it would be a pity to go all meat-and-potatoes. A crisp chopped vegetable salad with Green Goddess dressing and blue cheese “snow” (very fine shavings), followed by a grilled, farm-raised Georgia trout with al dente tiny garlicky green beans, constitute a lighter meal.

There are two dishes that make me want to hug the chef. One, served as a generous side, is a bowl of glossy, amazingly lively collard greens bathed in potlikker and doctored with hot pepper vinegar. The other is a dark square of gingerbread pudding as light as a custard and served with a perfectly tart and sweet lemon cream.

Evidence of clear thinking can be found in everything from the restaurant’s design to its wine program. The wines are food-friendly, and many selections can be ordered by the half-glass. The formerly dark dining room (some described it as “a dungeon” in its former incarnations) is now flooded with natural light thanks to five new windows cut right into the thick brick walls. At night, enormous ecru lampshades mounted on the ceiling bathe the dining room in creamy light. The servers beam with good humor. They’ll even help you fill your pockets with Lemonheads (made in Chicago rather than Dixie!) disbursed by a gigantic, somewhat temperamental gum ball machine near the door.

If you’re wondering what to wear, think Southern prepster and you’ll fit right in. The restaurant is every bit as good for lunch as it is for dinner and is less noisy then. A cute upstairs bar with a secluded terrace serves raw oysters and light bites. The only access, up a steep outdoor staircase, is a bit dodgy, even with the handrail, but the view of Midtown is breathtaking enough for you to make the climb.

JCT Kitchen & Bar gets almost everything right. Its name doesn’t exactly roll off the tongue (Junction—“JCT” in railroad speak—may have had a better ring, since the place does overlook active tracks), but so what? Ford Fry has a runaway success on his hands. Better get on board! —Christiane Lauterbach