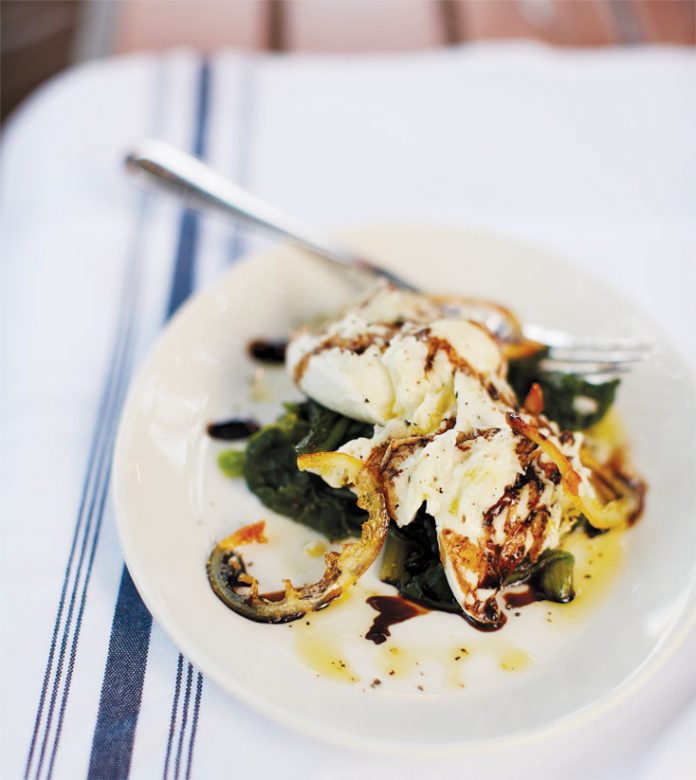 Food trends ebb and flow, but Kevin Rathbun and his restaurants endure. In Atlanta, his very name supplanted the antiquated term “New American cooking.” Taking a carte blanche approach to national and global flavors, Rathbun has forged a style of comforting excess. Sure, he may serve country ham grits or baby backs braised with Coca-Cola as sideways nods to the Southern food resurgence, but his kitchens (particularly the one at his flagship, Rathbun’s) gather pan-Asian, French, Mediterranean, and regional American flavors into caloric revelries. You don’t come to a Rathbun venture merely to stab at a salad. You come to take your taste buds to the equivalent of a luxury resort.

Rathbun’s opened in 2004. It helped morph a once-dodgy edge of Inman Park into the center of hipness it is today, and it led the city’s shift away from simple tapas toward finessed small plates. Menu highlights—eggplant fries dusted with powdered sugar, elk chop with blueberry demi-glace, a massive Maine lobster and roasted green chile soft taco—reflect his early career experiences cooking in New Orleans, Kansas City, and Dallas. Krog Bar, a tiny wine den housed in the same Stove Works complex as Rathbun’s, launched in 2005. And 2007 brought Kevin Rathbun Steak to a former Clorox factory just down the street. The chophouse offers meatballs in mushroom-
soy jus and adobo-spiced ahi tuna with chipotle–black bean mash and jicama-mango pico de gallo alongside Caesar salad and New York strip. Pure Rathbun.

But for KR SteakBar—his first new project in six years, which went live in February—Buckhead’s prodigal son returns home. Rathbun arrived in Atlanta in 1994 as executive chef of Nava, when Southwestern cuisine was all the rage. (Nava served its final blue corn sticks late last year, replaced by just-opened King Duke.) Rathbun moved on to other nineties hot spots in the Buckhead Life Restaurant Group stable, including Buckhead Diner and BluePointe. After he went solo, his loyal clientele may have dutifully trekked across town for the last decade, but they’re giddy to have him back.

KR SteakBar sits on a leafy bend of Peachtree Hills Avenue, amid the ADAC West showrooms. The building is below street level, sheltering the prim community from the restaurant’s barely contained pandemonium. The Johnson Studio assembled a mishmash of style elements that coalesce into a swank, kinetic haunt. White oak lines the floors; ribbed, backlit fiberglass paneling stretches across one wall; thick ropes (a shout-out to Texas?) help section off a central dining table that seats ten; and the ceiling bleeds a sultry red that’s nearly the shade of a Negroni cocktail. The crowd is ebulliently Buckhead: confident men with tans the color of peach jam, women in cliques trading stories about their personal trainers.

The restaurant’s name has a catchy double rhyme, but it doesn’t quite describe the direction of the food, which centers on Italian-themed small plates. Rathbun also brought in a noteworthy chef de cuisine, Chris McDade. A Gwinnett native, McDade previously worked at Maialino, a Romanesque trattoria in Manhattan. How fun to see Rathbun step out of the Americanized comfort-food zone.

The restaurant also snagged two accomplished bartenders: Tres Bullard, most recently at Top Flr, and Gabe Bowen, who traded in the vest and bow tie he wore at Restaurant Eugene for laid-back plaid flannel. An early favorite from their cocktail list is the summery Sophia: apricot liqueur, gin, vanilla–white pepper syrup, lemon juice, and a finishing splash of Prosecco. Pair it with the house pâté, a nubbly, surprisingly light variation piled onto grilled toast. Then give the wine list a serious once-over. It laudably delves into regional Italian wines, including half bottles of Barolo and Brunello, though of course there are also big-boy Napa cabs for Rathbun’s faithful high rollers.

A server will inform the table that the dishes—divided into salumi, appetizers, pastas, mains, and sides—are all portioned for sharing. Which is to say: Most are on the petite side, and though the prices of many plates range from $7 to $18, two hungry souls will likely spend at least $200 to fill up. Some menu sections deliver more consistent pleasures than others. Order heavily from the apps, which are constantly changing and show more attention to seasonality than has been typical of a Rathbun restaurant. An antipasto of simple fried artichokes squeezed with lemon evokes the verdant surge of spring (minus the brutal pollen count). Grilled fennel, pine nuts, and saffron complement pungent sardines. Crisp nuggets of sweetbreads over a slick of yogurt, topped with a tangle of shaved carrot and celery, play off each other in earthy, satisfying ways.

Not every idea works. Dosewallips oysters from the Olympic Peninsula receive crowns of celery and rhubarb that don’t add much pop. The most memorable dish I tried at KR SteakBar—cod collar perked up with a loose, caper-heavy tapenade—disappeared early from the menu. I’d like to see it return and replace an odd dish of lightly smoked swordfish morsels paired with an egg yolk cooked sous vide: Neither flatters the other’s wobbly texture.

McDade specialized in pastas at Maialino, but they need recalibrating here. In most cases it isn’t the sauce; it’s the noodles themselves. Orecchiette (“little ears” paired with a classic, gutsy trio of rapini, sausage, and garlic) and cavatelli (miniature shells tossed with a Ligurian montage of pesto, potato, and green beans) both disappoint because the housemade pastas arrive gummy. Stick to simpler shapes, like the fettuccine laced with tomato, thyme, and meaty hunks of pig trotter.

As for the steaks: These, too, mostly get the small-plates treatment. Tri-tip (a curved triangular cut from the bottom sirloin) sidles up to mushrooms and sorrel, an herb that lends a nice tang to the beef. A modest portion of shell steak (another name for New York strip) stands up to an espresso rub and a frilly wig of fresh horseradish. Hanger steak veers into bistro territory when matched with escarole, green garlic, and mustard. These sate me well enough. What I really crave, despite its $76 pricetag, is the funky, glorious dry-aged porterhouse for two—with a la carte sides of creamed, garlicky rapini gilded with wisps of ricotta salata, and kale sauteed with shallot and lemon. I’d welcome a couple of extra straight-up steaks (at a more reasonable price), on which I’d gladly glut myself and skip the ho-hum desserts. Try the pine nut tart with rose water gelato if your sweet tooth is nagging you.

What’s that? You can’t hear my quibbles above the ruckus? No matter. The restaurant’s magnetic charms and its effervescent throngs mitigate the occasional letdowns. And whether or not the kitchen refines its output, I’ve no doubt that KR SteakBar, like Rathbun’s other restaurants, will bask in a long, long run.