Home Uncategorized Review: Fishmonger is one of the city’s most exciting recent openings

One of the few blessings bestowed by the pandemic is the acceleration of hybrid business models in the hospitality industry. Much to my relief, interminable coursed meals have precipitously declined; eschewing the kind of performative cuisine that keeps you pinned to your seat for long stretches, with foolish formal service as the only source of entertainment, chefs are turning their focus to more spontaneous and casual experiences. If there were such a measure as PPM—that is, pleasure per minute—surely Nhan Le and Skip Engelbrecht’s new Poncey-Highland restaurant would outrank many of its highly rated peers.

At once a seafood market, cafe, and raw bar, Fishmonger (674 North Highland Avenue) lands on a street that’s fast becoming a gourmet magnet, steps from other newcomers Jinya Ramen Bar, East Pole Coffee, and the Peruvian restaurant Tio Lucho’s. Unlike Le and Engelbrecht’s other restaurants (the recently closed 8Arm, the late-night stop Octopus Bar), the new joint doesn’t serve mostly hipsters. A mature, moneyed clientele materializes on a daily basis, making Fishmonger more like the much missed Lusca in South Buckhead—alas, too ritzy for the young and too informal for the rich—than it is like the partners’ more raucous, bar-driven joints. With less than 800 square feet, walk-in cooler included, there’s no place to store alcohol on the premises, and Fishmonger will staunchly remain BYOB, facilitated by the presence just down the street of one of the best bottle shops to open in Atlanta in years, the fresh and fashionable but extremely serious Elemental. (Editor’s note: The partners have recently announced plans for a second location in the Pratt Pullman District.)

Formerly an architect’s studio behind the Plaza Theatre, Fishmonger’s white brick storefront doesn’t waste an inch of space. A community table and a couple of narrow ledges accommodate those who wish to snack on peekytoe crab and avocado toast, slide a few oysters down their gullet, or enjoy the marvelous blackened grouper sandwich with herb salad and pickled onion that has fast become the restaurant’s signature dish. Outdoors, one can picnic around the cute trailer—the bed of a converted Toyota pickup—parked streetside. A few flimsy garden tables and chairs and a solid bench plunked under a young tree inserted in a patch of rocks have transformed a little stretch of North Highland into the kind of micropark one finds in places such as New York or San Francisco. I’ve sat there lost in the creamy beauty of a chowder whose flavorful fumet is replete with shrimp, clams, bay scallops, Yukon Gold potatoes, and gorgeous chunks of fish.

Chef-partner Bradford Forsblom, a graduate of the Culinary Institute of America, has to be clever about managing inventory in the minuscule kitchen. The core menu includes a cute Gulf shrimp salad with dill and fried shallots on a sesame roll; an extraordinarily fresh shrimp cocktail served flat on a plate; gloriously messy New Orleans–style peel-and-eat shrimp in an oily, spicy bath; one of the best and most tender Caesar salads in Atlanta, with Calabrian chilis, anchovy dressing, and lovely little clumps of marinated flying fish eggs; and a justly popular sourdough bagel (from Evergreen Butcher & Baker) with cream cheese, cured salmon, fried onions, and herbs. A daily crudo and a few rotating specials add variety to the menu.

You can also take something home to cook yourself. I love to watch the cutting of big fish—wahoo, mahi mahi, grouper, fluke, tilefish—supplied by colorful purveyors such as Wes Brings You Fish, an older gentleman who runs his catch up from Florida in a beat-up truck with a big-ass cooler in it. Some of the fish is sold prepped and seasoned, ready to throw on the grill or under the broiler. Tinned fish such as Patagonia’s Spanish paprika mackerel can be purchased or eaten on the spot, and little tubs of chickpea salad and German potato salad are available in a reach-in cooler that’s also stocked with great sodas.

The tiny selection of oysters (all from the South, some from Kimball House’s new Shiny Dimes oyster farm in the Florida Panhandle) may not be consistently well detached from their pearly shells, but they are always delightful. I prefer them naked rather than made pretty with citrus foam, strawberry, and wasabi tobiko. Try not to show up when Fishmonger has run out of fish prior to the end of the day on Sunday—purposefully, as it’s closed Mondays—but plan on having a long-term relationship with a business that has no equal in the city.

Meet your supper
In addition to composed plates and grab-and-go fare, Fishmonger offers fresh cuts of seafood. A sampling: 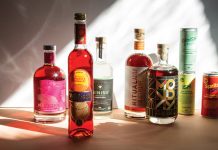