Georgia has its own version of Jamón Ibérico. The isolated Ossabaw Island hog is a descendant of the famed Spanish pigs brought over by colonists four centuries ago. A very small population is sustainably farmed on the mainland for heritage pork (have a taste at Atlanta’s 5 Seasons Brewing), though the breed is considered critically endangered. On the island itself, the nonnative feral hogs are destructive to the ecosystem (gobbling up sea turtle eggs, for instance) and are hunted. 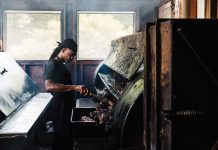