“I like to go to the Station Inn in the Gulch. It’s famous for bluegrass music, but a lot of other acts play there as well. It’s a tiny little hole in the wall with all these slick skyscrapers built around it, but it definitely holds its own. I’ve actually played a couple shows there myself. Performing there is the only thing better than seeing a show.”

“My Thursday night spot is Vaughan’s Lounge when Corey Henry and the Treme Funktet play. It feels like a jazz club that’s in your basement—it’s definitely cozy. You get free red beans and rice, and you get to know the bartenders and patrons. It’s tucked away, but especially during Jazz Fest, you’ll see a bunch of musicians coming in to check it out.”

“My number-one pick is the Fox Theatre. Just being in such a beautiful, historic place is an experience in itself. It’s very lavish, with lots of gold and tapestries and a beautiful pattern of stars on the ceiling. There aren’t too many places where the sound is so pristine. I’ve seen hundreds of concerts there since I was a kid, so it’s my sentimental favorite, too.”

“If I want to see any of the DJs I play on air, I go out in Miami and get the whole ‘Vegas’ experience at bigger clubs like Liv or Story. But my favorite venue in Fort Lauderdale, where I live, is Revolution Live. It’s a smaller venue where a lot of artists, such as Kings of Leon, start out. The casual and intimate environment is what keeps me going back. It’s the one that always feels like home.” 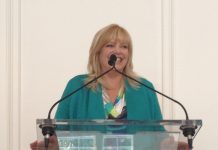