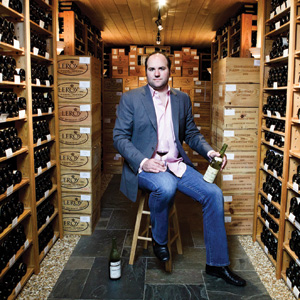 When I met Michael Bowden, I blurted out the same words to him that I often hear when people learn I’m a food critic: “Man, I want your job!” Bowden identifies himself as a “personal sommelier.” He manages the cellars of two wealthy oenophiles (who wish to remain anonymous), keeping track of 130,000 bottles of wine between them. Sure, some of his duties may sound like drudgery. He logs long hours cataloging in a customized version of FileMaker Pro. He unpacks pallets of wine (which hold around 600 bottles each), labeling and inventorying each item. But just as much of his professional life sounds like a scene from a cheerier remake of Sideways. Most years he spends a month during the fall in France, filling his days with buying trips to top wineries in regions like Burgundy and Champagne. He organizes and pours at local charity dinners and other events, like meetings of the Atlanta chapter of the Confrérie des Chevaliers du Tastevin, a group of Burgundy wine aficionados. (Burgundy produces arguably the most exquisite Pinot Noirs and Chardonnays in the world; it is a subject that comes up frequently in conversation with Bowden.) He may not sip from magnums quite like the one his client owns, a 1980 Henri Jayer Vosne-Romanée Premier Cru Les Beaux Monts—yes, a cult Burgundy—that went for $20,379 at a Christie’s auction this year. But he drinks very, very well.

The thirty-year-old’s interest in wine began in his late teens. His mother worked for a group of cardiologists in town. He would occasionally accompany her to restaurant meals where the doctors busted out California Cabs and the occasional trophy bottle from Bordeaux. “They had modest collections of 1,000 or 1,500 wines,” Bowden says. “And yes, I know how that sounds to most people.” (He now maintains a collection roughly that size himself.) After earning a bachelor’s in hotel restaurant management at Northern Arizona University and finishing an internship at Colgin Cellars, whose 2005 IX Estate Proprietary Red can go for $350 online, Bowden moved home. First he worked as a bellman at the Hyatt Regency Atlanta, and then he took a job as a wine steward at Cherokee Town and Country Club—where he met his first client, who needed help unpacking a new wine shipment. He’s been at the personal somm gig since 2006 and sometimes
considers taking all the juice-soaked knowledge he’s gleaned and working in, say, a monster Vegas restaurant with a sick wine list. Ah, but wouldn’t he miss those dreamy monthlong jaunts to Burgundy?