Back in the days before smartphones, my husband and I made a perilous journey in his 1986 Maxima to Lake Toxaway, North Carolina’s largest private lake. Lousy with directions, I steered him onto a steep wilderness route that must’ve been a forest service road. We twisted and turned up rutted gravel, past sketchy cabins and gnarly dogs. When we finally arrived at the Greystone Inn, it was an oasis.

That weekend, we enjoyed a sun-drenched stay by a pristine mountain lake—an area once billed as the “Switzerland of America.” Greystone was the quintessential cozy inn: a rambling old house that inspired blissful allusions to On Golden Pond and Laura Ashley. But Totally ‘80s is not what I want in a hotel today, and the inn had fallen off my radar in recent years. When I discovered that Natural Retreats, which manages more than a dozen small luxury resorts in the U.S. and U.K., was renovating the property, I was eager to see if they could deliver the charm without the chintz.

As we pulled up to the front (thanks, Siri), the three-story, Swiss-style mansion looked much the same. It was built around 1915 by Lucy Camp Armstrong—who, with her first husband, George, also built the grand Armstrong House next to Savannah’s Forsyth Park. Inside, the inn still felt mostly like a private residence. Fires roared in big stone fireplaces, warm paneling cozied up quiet corners, wood floors creaked, and screen doors slapped. I was a little bummed to see that one front room was now an outfitter’s shop, even if that meant fresh Starbucks was now at hand.

Most of the dated wallpaper is gone, and every room has sumptuous, fresh white bedding. Because it’s an old house, accommodations vary widely. When we objected to a room without a place to hang our clothes, we were moved to one with both an armoire and a cedar closet.

The lake was as spectacular as we remembered. On a steep hillside, shaded by tall maples and oaks just starting to turn, we rocked in a wooden swing and watched geese fly by in symmetrical Vs. Still waters perfectly mirrored vintage boathouses, and, as if on cue, a wooden boat waving an American flag cruised by and traced a few lazy loops to greet us.

The new managers have done away with some traditions—afternoon high tea on the front porch, jackets for men in the evenings—but my favorite, then and now, remains the daily afternoon Champagne cruise on the inn’s mahogany electric launch, Miss Lucy. We lucked into a tour captained by John Heinitsh, whose father founded the Lake Toxaway Company in 1960.

As we glided along the placid, clear waters, ringed by the Blue Ridge foothills, Heinitsh regaled us with tales of Toxaway history: Popcorn Sutton’s famous moonshine runners, who inspired NASCAR; Lucy Armstrong Moltz, who fascinated a young Heinitsh by showing him the elephant gun from her African safari days; the once-grand but now-demolished Lake Toxaway Inn, which drew the likes of Thomas Edison and Henry Ford; and the 1916 flood that burst the earthen dam and drained the lake, damaging local tourism until Heinitsh’s father bought thousands of acres for $50 each and rebuilt the dam in the 1960s.

You set your own pace at Greystone—whether your style is laid-back (crosswords, cornhole, croquet, spa) or active (whitewater rafting, hiking, rock climbing, falconry). Hunger Games fans can tour nearby film sites, while the country club set can play tennis and golf. The adjoining eighteen-hole, par-71 golf course is as lush and scenic—but, happily, not as demanding—as many elite mountain courses. Inn guests also have access to boat rentals at the private marina (no Jet Skis allowed, thank you very much).

The inn shares a chef with the neighboring private club, which explains the staid but pleasant cuisine. With its fireplace and soft classical music, the peaceful lakeside dining room is guaranteed to lower your blood pressure. And on that clear fall morning, enjoying perfectly prepared French toast at an outdoor bistro table, surrounded by flower boxes of cheerful geraniums, I’ll swear it did feel a bit like an Alpine retreat.

Tip: Be forewarned: The path down to the boathouse is steep. Wear sensible shoes.

Back to Cozy Inns 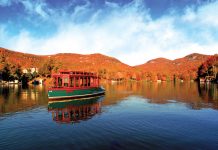 Where to Stay: Spotlight on The Greystone Inn 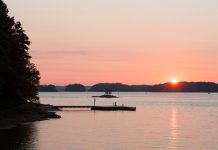 Want a Georgia lake house? Here’s what you need to know.