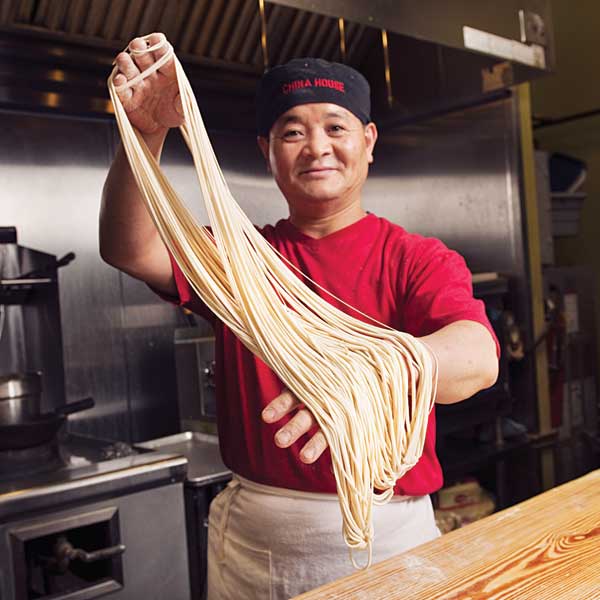 The most global culinary destination in Gwinnett, the metro area’s most international county, at first glance looks like a typical American food court. But the bazaar inside Duluth’s Assi Plaza brings together the cuisines of Korea, China, Japan, Vietnam, Russia, the Philippines, and Peru under one roof. Compared to the other Asian hypermarkets—Super H Mart, Great Wall Supermarket, and Mega Mart—opened in recent years along Pleasant Hill Road, Assi (which launched in 2009) delivers the most cross-cultural reach. In its food court, counters with attractive, uniform signage face a common dining area with wood-grain, laminated tables grouped on a linoleum floor that draws the eye with its sunny colors. Every vendor posts backlit pictures of staggeringly diverse menu items.

I inevitably gravitate toward China House, a modest stall with a long wooden pastry board and huge simmering vats of water, which specializes in traditional hand-pulled noodles. The owner, informally known as “Master Han,” likes to catch a game on the soccer channel that plays throughout the day in the dining area. As soon as he sees a customer heading toward his place, he shuffles back inside his open kitchen and starts wrestling heavy clumps of dough. Rhythmic pounding sounds accompany motions resembling rope jumping or a particularly athletic form of cat’s cradle as the thinning strands get stretched to roughly the width of linguine and twice the length. Their firm, elastic texture and charming irregularity come alive whether they are combined with a sludgy black jajang soybean and meat sauce brightened by pickled daikon or heated in soups and stir-fries.

China House may be the star enticement, but there is plenty more to see and taste. I like to take in the scene, watching the throngs of customers and trying to guess their origins. I’ve witnessed public displays of affection on numerous occasions in front of cheerful Mostro Burger, home to a well-spiced, Peruvian-inspired patty with the firm texture of meatloaf. Nearby, ethnic Koreans born in Russia run Lana’s Express, which serves Atlanta’s best selection of homemade pirozhki, lamb pilaf, and shiny pelmeni dumplings filled with onions and ground meat.

I recently started a conversation with a young Korean couple in an effort to learn the name of the stall where I often stop for rice cakes in chili sauce and a milky beef soup rich as consommé. “It’s called Arirang,” they said, pointing at the court’s only untranslated sign. Because there are better options around, I tend to ignore the Vietnamese pho place and the counter that sells teriyaki and makes sushi to order. I am smitten, though, with the recently opened Kuya’s Food Express, a Filipino shrine to the art of pig cookery, including pork deep-fried and paired with crunchy puffed tofu or slow-cooked in a vinegary adobo. Rich cassava cake and multicolored halo-halo (a mix of shaved ice and evaporated milk) add to the intoxicating calorie count.

Not every business has been successful: Sichuan and Mexican entrepreneurs have already gone bust. But you won’t find, in one place, a livelier collection of the worldwide influences revolutionizing our city’s food scene. With a few dollars, you can buy tastes that will forever change your perception of the food court as a culinary wasteland.