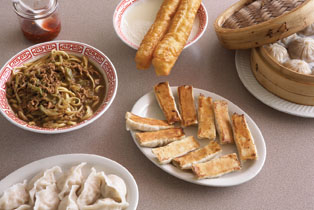 What does the rest of the world eat for breakfast? Such a question may not keep you up at night, but even the most active ethnic buffs often draw a blank when it comes to other cultures’ ways of starting the day. Breakfast central for the local Beijing community is Northern China Eatery, a sweet, unadorned dining room on Buford Highway that sits in the shadows of Italy Optical, a fancy Asian-owned establishment whose sign you should watch for in order to make the proper turn. There is no need to scramble out of bed early for hot soy milk; crisp, long crullers served plain or folded into thin egg cakes with hot sauce; dumplings; savory cakes; and other unexpected, delicious treats. Breakfast is served all day between 9:30 a.m. and 10 p.m. (except Thursday, when the restaurant’s hours are shorter) alongside dishes such as pig’s feet, pig’s ears, noodles with preserved vegetables, and hot pots filled with stewed oxtail or (I kid you not) ox penis.

Unlike the Cantonese, who eat mostly rice, seafood, and lots of vegetables, the northern Chinese subsist on a hearty wheat-based diet. They love hot spices, mutton, and pork meat. Their dumplings are nothing like the ones you know from going to dim sum, a Cantonese practice. Order a plate of pan-fried pot stickers barely bigger than Italian agnolotti, a bamboo steamer with a layer of soup dumplings replete with rich broth, a couple of pastries such as chive pies, wheat cakes stuffed with beef, or a large Mandarin pork cake divided into wedges, and you will have a feast.

In order to taste other items, such as brilliant pork buns, boiled fennel dumplings, and fish fillet hot pot with tofu and cabbage, it is best to gather a group. I’d be surprised if you managed to spend $10 per person on a memorable meal. The staff isn’t used to having a Western clientele, but they rise to the occasion in sometimes-limited English. I have eaten almost everything on the menu, even the delicious shredded potatoes (cold Chinese hash browns?) and the “crispy rice” dish consisting of wet, long strips of something that looks like wheat pancake in a dark bean-paste sauce. I am not giving up bacon and eggs quite yet, but I crave the tastes offered at this restaurant. 5141 Buford Highway, 770-458-2282