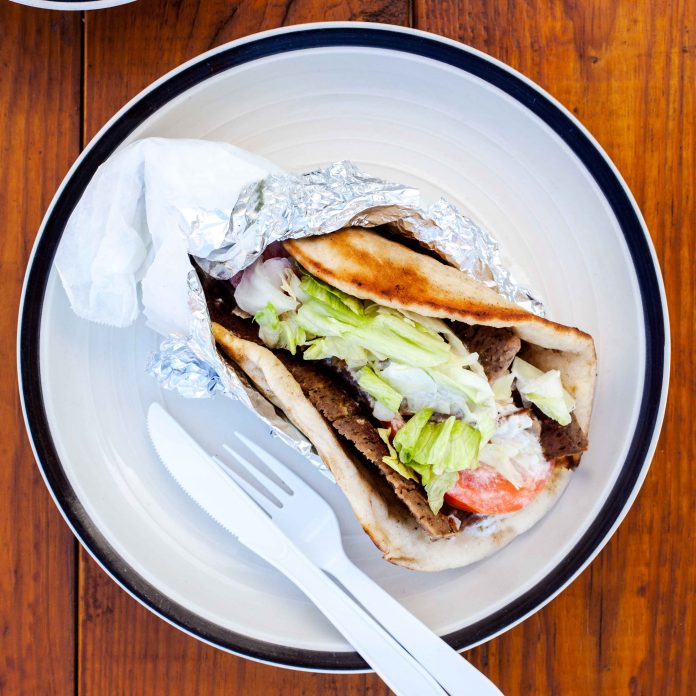 After nearly twenty years dishing out gyros and Greek salads, Nick Poulos no longer looks quite as frisky as his cartoonish portrait painted on the large sign outside his business. His bristly mustache turned gray long ago, and at sixty-nine, he moves a little more slowly. But his carryout restaurant continues to thrive in a dreary area near Daddy D’z BBQ Joynt just west of Oakland Cemetery. In the nineties, Poulos’s brother ran a liquor store a block and a half away from the restaurant—then an empty lot—and suggested the location. The package store is long gone, but neighborhood loyalists have kept Nick’s Food to Go busy for years, largely through word of mouth.

A gravelly parking lot flanks the restaurant’s building, half of which is painted blinding white and the other a cool Aegean blue. Two varnished picnic tables and a garden made of truck tires complete the landscape. Inside, a cheerless foyer includes a window for ordering food and a bench for waiting. But you don’t come for the aesthetics; you come to pick up some of the most carefully prepared Greek food in Atlanta.

When Poulos’s wife, Eleni, who does most of the cooking, isn’t peeling whole heads of garlic to make her magnificent yogurt-based tzatziki or stirring pots on the stove, she watches cooking shows on a mounted television. The star of the menu is the massive gyro (90 percent lamb, 10 percent beef), cut in fat slabs and layered in a grilled pita with lettuce, tomato, and a whopping dollop of tzatziki. But regulars also count on hand-formed burgers, pork souvlaki pulled off skewers, crescents of Greek-style potatoes sprinkled with herbs, and the huge salad of iceberg lettuce, tomato, cucumber, unpitted olives, and a shower of sharp feta.

Eleni’s spanakopita may be the best in the city, a rich blend of spinach and feta stuffed between thin sheets of pastry. But her crowning glory is the pastitsio she makes every Thursday. Often called “Greek lasagna,” the dish combines macaroni with ground beef and a thick, classic béchamel. A pinch of cinnamon adds elusive sweetness, and the whole bakes into a puffy, custardy masterpiece worth a drive across the city. 240 Martin Luther King Jr. Drive, 404-521-2220, nicksfood.com

Photograph by Helena Peixoto. This article originally appeared in our May 2013 issue.