Home Uncategorized Get away to Savannah 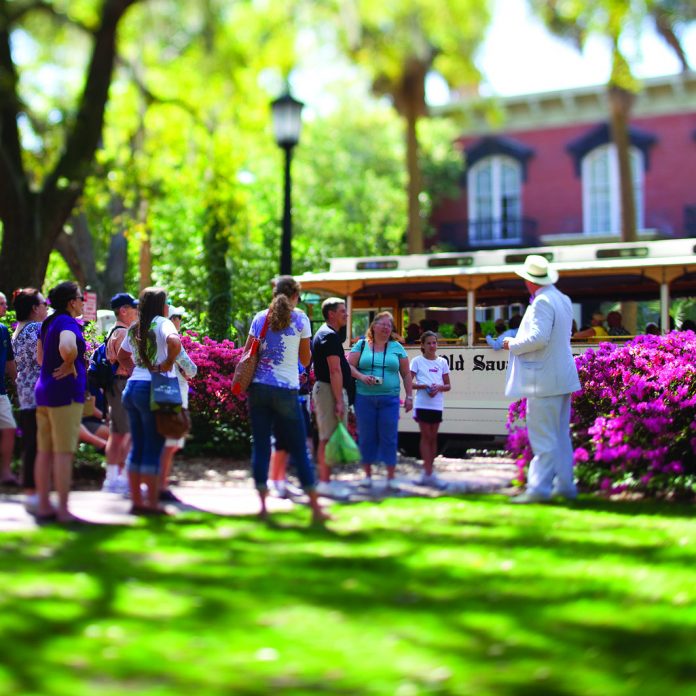 My last girls’ getaway to Savannah was chaperoning a gaggle of middle schoolers on the ritual pilgrimage to the home of Juliette Gordon Low: old-money Savannahian, fabulously feisty role model, and founder of the Girl Scouts of the USA. Like many Scouts, we made the trek in March, when the first troop was started—and thus we ran into pilgrims of another sort, paying homage to St. Patrick.

Herding a clutch of eleven-year-olds sporting green vests through the souvenir shops on River Street, my prime motive was thwarting a collision with frat boys draped in green beads and toting red Solo cups (Savannah famously allows open containers in the tourist district). Huddled in a carriage during a nighttime ghost tour, the girls were more spooked by staggering celebrants than our guide’s tales of romance, vengeance, and murder. Our horse’s hooves clopped on cobblestones, the girls squealed, and I silently vowed to return for a grown-up Savannah excursion.

I finally went back last fall, timing my visit to another local tradition, the annual Telfair Art Fair, and the reopening of the Savannah College of Art and Design’s Museum of Art, which had just completed a $26 million expansion. With so many cultural blockbusters—from spring’s Savannah Music Festival (March 22 to April 7) to fall’s Savannah Film Festival (October 27 to November 3)—it’s easy to plan visits around special events. (In April alone, there are festivals featuring sidewalk chalk art, animation, opera, and historic gardens.)

Looking out from the eleventh floor of the Westin Savannah Harbor Golf Resort & Spa, we toasted the city sparkling across the river, then strolled down to the dock where the Savannah Belles Ferry departs from City Hall landing. (The free, adorably retro boats operate every twenty to thirty minutes from 7 a.m. to midnight. Bonus: You might spot a dolphin.)

As the ferry pulled into the dock, the afternoon sun glinted on City Hall’s gold-domed tower and warmed the old warehouses lining the river, reminding me of Savannah’s rich history. Founded in 1733, the city is more than a century older than Atlanta and represents one of the quirkier efforts of British colonization. Georgia was intended to be an alternative to debtors prison for the “worthy poor” and an outpost for agricultural experimentation. During its first twenty years, the colony banned Catholics, liquor, slavery, and lawyers. Savannah founder General James Oglethorpe envisioned Georgia’s capital as the country’s first planned city, a quilt of squares and public gardens. Some 278 years after he sketched the town’s grid, his pattern of dense commercial and residential blocks interspersed with open, tree-shaded squares is well preserved.

We walked up Bull Street to Forsyth Park, admiring its postcard-perfect, two-tiered fountain, and got our caffeine fix at the Sentient Bean, an indie coffeehouse–performance venue. On our return loop, we took Drayton Street up the east side of the park, mostly to ogle the opulent Mansion on Forsyth Park, a Victorian-era hotel with grand Romanesque architecture. Then we walked riverward, lingering at Lafayette Square to take in Flannery O’Connor’s birth home, in the shadow of the Cathedral of St. John the Baptist.

Dinner at the Westin’s Aqua Star restaurant offered both a spectacular waterfront view and superior hotel fare. Skip the buffet and go for chef specials like saffron-imbued Lowcountry seafood stew or potpie bursting with crab, scallops, and local veggies. After s’mores at the riverside fire pit, we headed upstairs, discovering that the hotel TV plays an endless loop of Midnight in the Garden of Good and Evil, the movie version of John Berendt’s bestselling account of a scandalous Savannah murder trial and the city’s social eccentrics.

Saturday, still in a Midnight mood, we breakfasted at Clary’s Cafe, a diner that retains a shabby charm despite celebrity status in both book and movie. Our main morning agenda was the SCAD Museum of Art, a marvel of retrofitted structures. The new expansion marries the original Greek Revival space in the 1853 Central of Georgia Railroad headquarters with ruins of the rail depot and sleek new classroom and gallery space, creating an 82,000-square-foot complex. Highlights include African American art from the Walter O. Evans collection, a robust photography selection, and the André Leon Talley Gallery, named for the legendary Vogue stylist and showcasing design and fashion.

The Distillery was nearby for lunch. The easy-going gastropub is located in a distillery that became a pharmacy during Prohibition (while reportedly churning out bathtub gin in second-floor lavatories). The bar’s been restored to its pre–Comstock era mahogany grandeur and offers close to 100 bottled beers and craft drafts such as Original Sin Cider.

Fortified, we meandered over to Broughton Street, the main shopping thoroughfare, to take in local favorites like the Paris Market & Brocante, a sort of two-story European flea market, and Zia, a boutique of handmade jewelry designs. We savored more comestible history at Leopold’s Ice Cream, still serving recipes concocted by its founders in 1919.

The rest of the evening, we explored artists’ tents as Telfair at Twilight got into swing. With the twangy Americana of local band the Train Wrecks in the background and great globes of lanterns suspended over the streets and squares, we paused for a to-go cup and headed back to the harbor, awarding ourselves a merit badge in Savannah culture. 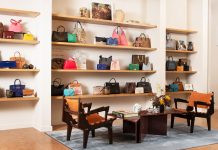