Home Coronavirus Aix and Tin Tin will close, to be replaced by a more...

Provencal-inspired restaurant Aix and its adjacent wine bar Tin Tin will close after service on Saturday. In their place, executive chef and partner Nick Leahy is creating what he hopes will be a neighborhood restaurant and bar, called Nick’s Westside. Featuring a new menu of locally sourced dishes, the new restaurant opens Tuesday, October 13 at 956 Brady Avenue Northwest.

“The Aix menu wasn’t really conducive to takeout, and high-end niche fine dining wasn’t what the public was craving,” Leahy explains. “I made a more approachable, broad-appealed menu and got really nice response.”

Inspired by a need to support those who work for him, as well as farmers and purveyors, Leahy turned his focus to expanding his new menu into a new direction for the restaurant as a whole.

“This year has given a large dose of perspective. The most important thing about what we’re doing here is not a specific concept, but the people involved,” he says.

Beverage director Matt Gibbons streamlined the wine list from Aix days and compiled a beer list that’s 100 percent local. Cocktails feature the herbs in season. The “But Nothing is Lost” cocktail features sage and rosemary-infused gin, and “Nothing Lasts” highlights peach-infused vodka with aperol, coconut milk, and lemon.

Bottled and canned beer and wine will be available to-go, along with cocktail kits designed for assembly at home.

Guest can dine in the socially distanced garden courtyard or on the patio, which now features hopscotch and tic-tac-toe. Indoor seating is available as well. 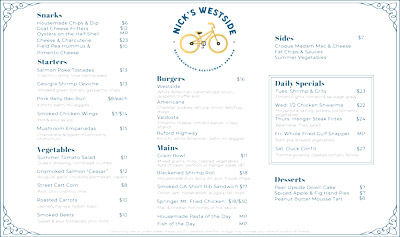