According to Benjamin Castro, the new executive chef at the Mill Kitchen & Bar in Roswell, the restaurant’s opening chef, Marc Taft (chef/owner of Chicken and the Egg in Marietta) “had a tantrum and walked out in the middle of a shift” about two weeks ago. Castro did not see the event firsthand but instead is relying on what he heard from his staff. Taft, however, says a difference in philosophies with the owners led him to leave the restaurant without notice after multiple attempts to work out their differences. Taft denies having a temper tantrum and says he absolutely completed his shift.

“Was it a pretty breakup? No. Was it ugly? No,” he says, explaining that he couldn’t stand by while staff members were being treated poorly and the menu was deceiving guests (by promising some fresh ingredients when frozen ones were being used, for example).

Castro, however, has stepped in to pick up the pieces, which he describes as fixing the recipes, training the kitchen staff and soothing unhappy customers.

“I wish Ben a lot of luck,” Taft says. “I hope he can make the Mill what the owners want it to be.”

“We’re elevating the look and taste without pretension or white tablecloths,” he says. “We’re taking indicatively southern foods and will do them in crazy ways.”

He said the complaints about the food prior to his arrival include it being bland. He points out the vinaigrette recipe didn’t include salt; the vegetable stock erroneously included green apples; and the macaroni and cheese was made with Velveeta. Under Castro’s guidance, the macaroni and cheese includes béchamel, sharp yellow, sharp American white, smoked gouda, parmesan and gruyere cheeses, plus bread crumbs.

Castro also revamped the apple cobbler, taking it from a puff pastry to a crispy, crumbly dessert. He’s added some specials to the menu offerings, as well as some new desserts, including milk chocolate pound cake with coffee and whiskey port de crème.

He’s working on a full menu change for summer; it will be unveiled in two to three weeks. In the mean time, he’s focused on “making the food as beautiful as the place.” 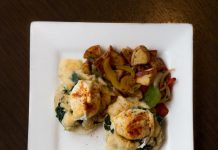 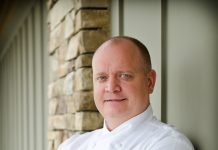