Home Uncategorized Check out the menu for Grana, the upcoming Italian restaurant from the...

After several delays, Grana, the Italian restaurant from the White Bull founder chef Pat Pascarella, is slated to open within the next month, and a first look at the menu (see below) shows pizza, pasta, meatball flights, and wood-fired entrees.

With a prominent location in Piedmont Heights across from Grindhouse Burgers (1835 Piedmont Avenue), Grana will be led by executive sous chef Elliot Cusher (formerly of No. 246 and Indaco), general manager Chris Dean (previously of Murphy’s and Ecco), plus sous chefs from Empire State South and the Optimist.

“It’s all coming together. It’s everything we wanted and more,” Pascarella says.

When it opens, Grana will serve dinner only, with lunch and brunch planned for the future. Expect nightly specials such as crudo and lasagna. The rooftop patio will have a separate menu offering meatballs and pizzas, plus a salumi plate, toasts, salad, roasted broccolini, Calabrian chili wings, and one rotating sandwich such as Porchetta or chicken cutlet.

“We spend a lot of time sourcing,” Pascarella explains. “We’re bringing in the Sclafani tomatoes I grew up with. It elevates the food.”

He says he decided to focus the wine list on Southern Italy, “deep into the roots of Naples.”

“What grows together goes together,” he says.

Together with Dean, Pascarella and his wife Megan Pascarella, a certified sommelier, created the wine and cocktail lists. There will be plays on Campari sodas and three types of aperol spritz.

Grana’s space is divided into four areas: a main dining room that seats 100, a private mezzanine, a rooftop bar, and a street level patio. The entrance to the restaurant is reminiscent of alleyways in Naples and Rome. There’s stone on the walls, hexagon-shaped herringbone floor tiles, and a mural that depicts the statue of David’s head looking down on the restaurant. The back wall displays black-and-white photos of Pascarella’s family.

The rooftop bar will play upbeat music from the ‘70s through ‘90s. There are three firepits and a “Best Meatballs in Atlanta” neon sign with the word “meat” intentionally flickering. Italian Rosetta Stone lessons will play in the restrooms.

“We went authentic Italian here. Eventually, the idea is to do one or two Italian-American themed restaurants throughout the metro Atlanta area,” Pascarella says. 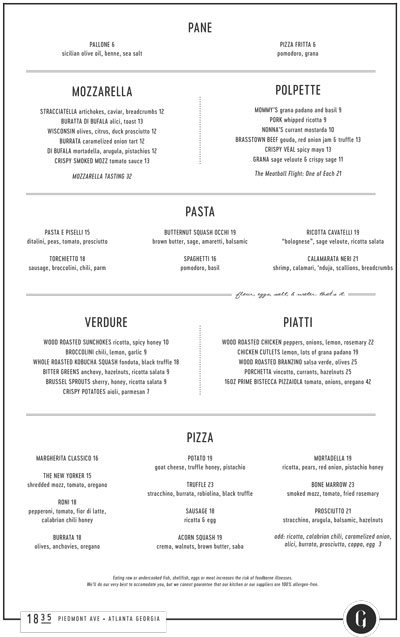 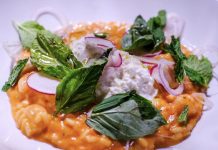 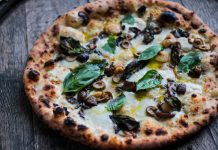