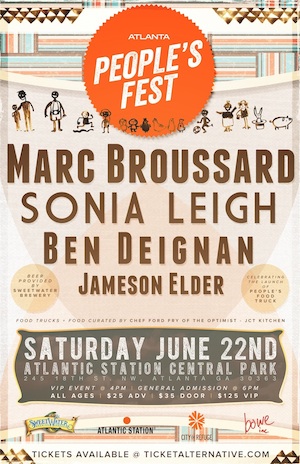 Advance tickets are $125 for VIP (which includes early access to the 4 p.m. VIP Party and premium seating for the concert), $25 in advance via the City of Refuge website and $35 at the door if the event doesn’t sell out in advance.
Atlantic Station’s newest business owner, Chick-A-Biddy chef Shaun Doty will host the VIP Party’s Iron Chef-inspired cook off on stage.

“I’m supposed to host and heckle the chefs,” Doty explains. “Which all sounds incredibly great until I bomb. I’m known for getting colossal stage fright. I might get carted off, who knows! But it’s for a great cause, I love this charity so it’s all good.”

Despite some last-minute construction headaches (“I’ve been on the phone all morning. Construction is so not my forte. I’m the cook!”), Doty is excited about the July 1 debut of Chick-A-Biddy at Atlantic Station, the sister chicken joint of his Bantam & Biddy eatery at Ansley Mall.

“The new place is going to be breezy and bright and fun,” he says. “I’m excited to be at Atlantic Station. The place has had an interesting past but the new owners have skin in the game and I’m excited to be on the team. People’s Fest gives me an opportunity to hang out and get to know more people too while supporting a great cause.”