Home Restaurants Q&A with Park 75’s Robert Gerstenecker
ATL Food Chatter: April 26, 2011
(To receive the Chatter and other culinary tidbits directly in your inbox, sign up for our weekly dining newsletter)
Last month the nation’s first Hotel Restaurant Week kicked off in Atlanta. It was the brainchild of Robert Gerstenecker, executive chef at the Four Seasons Atlanta’s Park 75 Restaurant. The success of the event could change the way Atlanta’s dining scene views hotel restaurants, which Gerstenecker views as an often-overlooked segment of the market compared to other cities.
He says that in the last couple of years, the explosion of new hotels and their restaurants has created some additional dining options that are just as relevant as local restaurants are but are often perceived as more special occasion destinations by locals. To change this perception, he drew on his experiences with many of Atlanta’s other restaurant events and geared the new event toward helping hotel restaurants receive more exposure.??Ten Hotel restaurants in Downtown, Midtown and Buckhead (among them BLT Steak at the W Hotel Atlanta-Downtown, Livingston at The Georgian Terrace Hotel, and Paces 88 American Bistro at The St Regis Atlanta featured $ 25 three course meals. Gerstenecker says that Park 75 doubled their reservations that week.
He recently shared some of the details regarding the event, its impact and future.
Q: Where did the idea for a Hotel Restaurant Week originate?
RG: Two years ago, when we were participating in the local restaurant week with the freestanding restaurants, I saw an opportunity for hotels to showcase the different food and creative chefs with an all-hotel restaurant event. This was in response to the changing world of hotels, and an effort to entice locals to discover how hotel restaurants are changing and moving away for the old formal style of food and service.
Q:How did the event turn out in terms of the original expectations?
RG: We were very happy with the first HRW outcome. Many locals that had never gone to the restaurants enjoyed the event and said that they would be back.
Q: What are the plans for the future of the event?
RG: My goal is to have HRW be a national event starting next year, using the success of our event as a springboard to launch in the different cities.
Q: What do you see for your future career in Atlanta?
RG: I am ever more excited about this city and the potential it has. The focus for me is to continue to develop Park 75 and to be part of many new developments at the Four Seasons and in the Atlanta market.
NEWS AND NOTES:
Atlanta Culinary Tours is donating a portion of their ticket sales to the Red Cross to aid in tornado relief efforts.
New York supper club maven Sara Simmons is bringing her underground supper club, City Grit, to Atlanta, Tuesday, May 3. Simmons will host Parlez Vous Francais, Y’all—featuring French dishes with a Southern twist along with wine and cocktails.
Pura Vida’s Hector Santiago will headline Hands On Atlanta’s ninth annual A Taste for Volunteering on Friday, May 6, 2011 at The Foundry at Puritan Mill from 7:00-11:00 p.m.
The 2011 High Museum Atlanta Wine Auction raised $1.7 million, according to a press release. (The dates for the 20th annual High Museum Atlanta Wine Auction are March 28–31, 2012.)
Decatur. The AJC is reporting that food allergy-friendly baker Pure Knead Bakery, a supplier to spots like Yeah Burger and Sprig, now offers retail sales on Saturdays from 9 a.m. until 1 p.m. at 186 Rio Circle, Suite C.
Tomorrow’s News Today is reporting that the former Athens Pizza Express location at 1788 Clairmont Road will become Kitchen 155, a family-friendly diner, by Memorial Day.
Downtown. The Sweet Auburn Curb Market’s Bell Street Burritos was named “One of the 10 Great Places to Bite into a Big Burrito” in a recent USA Today
Little 5 Points. What Now Atlanta got the scoop on OMG Taco—featuring “hybrid tacos” made from Korean and Mexican ingredients—is slated to open at 1126 Euclid Avenue.
Roswell. Look for Table & Main, serving traditional Southern foods, to open at 1028 Canton Street this summer.
Virginia Highland. Creative Loafing is reporting that Genki Noodles and Sushi has opened in the former Everybody’s Pizza spot.
Question of the Week: What local architectural firm has been tapped by an international hotel chain to design a new concept for one of its famous brands? 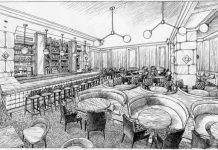