I am an ecowarrior. A meticulous recycler and a passionate composter, I try to generate as little garbage as possible. For years, I’ve made an effort to avoid purchasing prepackaged groceries, preferring, when I can, to buy in bulk—I’m intimately familiar with the process of scooping beans or rice from barrels and bins. And, of course, as a critic, I’ve always favored dining in over carrying out; it allows me to evaluate a restaurant’s ambience and amenities as well as its food.

Imagine my horror now at having my fridge invaded by takeout containers, and my under-the-sink space filled by an ever-growing supply of brown paper bags. Over the past year, some of the best meals I’ve eaten—an ultrarefined feast from Talat Market, for example, which opened in the unlucky month of April 2020—have come with no fewer than eight containers, each drib and drab of sauce or condiment encased in its own little plastic cup, the main deal portioned off in a variety of detestable disposable coffins. To-go meals—a necessity at times, both on a professional and personal level—have been the bane of my pandemic life. They’ve also been central to it.

My takeout vehicle of choice? On the one hand, I disapprove of expanded polystyrene foam, known widely if imprecisely as “styrofoam.” (DuPont, the maker of the real, usually pale blue Styrofoam™—invented at Dow Chemical in the 1940s and used as a building material—has tried unsuccessfully to protect its brand from genericide.) This stuff is easy to hate. Generic styrofoam is viewed as déclassé by the elite and condemned by all environmentalists. It’s so resistant to reuse that, in Atlanta, there’s only one place where ecominded citizens can take it: the aptly named Center for Hard to Recycle Materials, or CHaRM. Yet show me an iced tea that tastes better and remains cold longer in a waxed cardboard or plastic cup than in a styrofoam one.

Some of my favorite meals always have come nestled in styrofoam. Both Zyka (spicy Hyderabadi-style cuisine in Decatur) and K&K Soul Food (a splendid cafeteria in English Avenue) don’t even bother with regular plates. Even though I sometimes ask for leftovers to be packed in foil rather than foam at my beloved Taqueria del Sol, I appreciate the restaurant not degrading my food with fancy alternative containers—which may be more ecofriendly but are often a poor match for hot meals. Waxed cardboard boxes, with annoying flaps I can never reclose, make food sweaty and oily. Plastic containers, especially thick ones, are nearly impossible to wrestle open without risking their contents jumping into my lap. Biodegradable paper clamshells get soggy.

There is an easy answer to all that stress: styrofoam! And I’m not the only one who appreciates a properly insulated meal. On Twitter, the Denver-based soul food scholar and award-winning author Adrian Miller regularly posts marvelous short videos of styrofoam boxes opened slowly, as if by invisible hands, to reveal their generous contents. Speaking of revelations, I learned from a friend to insert a few toothpicks crosswise into styrofoam boxes to avoid any ill-timed spillage—wisdom that’s more important than ever now that we’re carrying so many meals home.

I vastly prefer the white containers to the black ones, which make no sense to me—and aren’t accepted at CHaRM, anyway. And even though I can’t stand the squeaky sound and the environmental impact, I salute the superior insulating and moisture-resistant properties of expanded polystyrene. Hate me if you want! 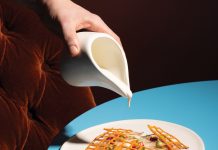 What’s next for restaurant criticism?