Agriculture is Georgia’s biggest industry. It’s time we got to know our farmers better, don’t you think?

JoVonna Johnson Cooke and Eugene Cooke
The Cookes grow squash, zucchini, tomatoes, and other crops for their their vegan meal kit delivery service MaituFoods. (Sign up at maitufoods.com.) They do this on five acres of land they call Awali near Stone Mountain. Meanwhile Eugene runs Grow Where You Are, a company he founded to help people start fruit and vegetable gardens in their own communities. Says JoVonna, “There isn’t too much urban farmland in Atlanta that Eugene hasn’t touched.”

Chris Edwards
Edwards works 11 acres of Stockbridge land called Mayflor Farms. The grandson of a traditional header, Edwards studied ethnobotany in Ghana before returning home to Georgia four and a half years ago. A small portion of Mayflor’s produce goes to meal kit delivery service PeachDish; the rest goes to Emory University, Sevananda Natural Foods Market in Little Five Points, Kevin Gillespie’s restaurant Gunshow, and the Peachtree Road and Grant Park farmers markets. Edwards’s favorite crop? Cantaloupe, available now through September. “You have to have patience; they take close to 100 days or longer before they’re ripe for picking,” he says. “Once you get one, though, it’s so sweet.”

Joe Reynolds
Reynolds and his wife, Judith Winfrey, named Love is Love Farm for an album by one of their favorite bands, Lungfish. After college, Reynolds spent two months volunteering on a coffee farm in El Salvador. “Before then I didn’t understand what it was like to work with your body and hands, work in the sun, understand plants and seasons,” he says. It stuck. Today Reynolds farms a four-acre plot of land near Decatur called Gaia Gardens, while Winfrey is the president of local meal kit delivery company PeachDish. About 10 percent of the vegetables he grows go to PeachDish, 20 percent to restaurants, and the rest to a CSA (sign up online at loveislovefarm.com). His favorite vegetable to grow: peppers. “They can be used fresh. They can be smoked. They can be dried into paprika . . . Yeah, peppers are the jam,” he says. “We probably grow more varieties of peppers than most people thought existed.” 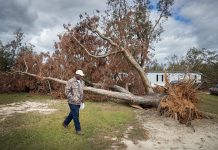 Georgia pecan farmers have thrived for a century. After Hurricane Michael, they’re unsure if they’ll survive another generation. 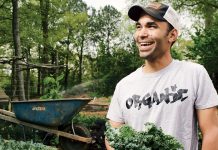