Turning vacant lots into urban farms is nothing new, but a few innovators are taking intown agriculture to another level. Micro­enterprises such as Widdernshins Urban Farmstead in East Point operate on just a fifth of an acre. Forest Park–based PodPonics revamps old shipping containers to hydroponically grow greens. At Georgia Tech, Steven Van Ginkel is pioneering efficiency in aquaponics—water-filled “beds” that raise fish and produce. 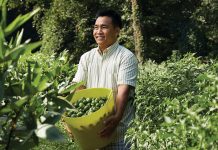