It’s cold and dark, before sunrise, outside the Georgia Dome on the Friday before the old stadium is set to implode, and I am alone. It’s eerily quiet. Then people begin to appear, materializing on bikes or on foot, coming around corners and offering me bear hugs. This is a little unsettling; I’m the kind of person who can’t make a sentence (and definitely doesn’t want to hear one) before 7 a.m. But hugs are part of the deal when you show up for a free group workout with the November Project.

To call this a typical, early-morning bootcamp would be a bit disingenuous. To call it a cult would be a bit overdramatic—but only a bit. Described by Runners World as a “grassroots fitness group that’s part flash mob, part running tribe, and all the rage,” the November Project was founded six years ago in (you guessed it) November in Boston by two college friends as a way to stay fit for free during the colder months. Since then the program has evolved into a movement, with 45 “tribes” around the world. In some cities, more than 300 people might show up for a workout.

Atlanta (#44) was without a November Project tribe until October 22, 2017, when the official honors were bestowed on a local workout group called Fitlanta. They now meet at 6:27 a.m. on Wednesdays at the North Avenue Bridge on the BeltLine and Fridays at the Piedmont Conservancy Visitors Center—no matter the weather. The turnout varies. There’s no fee. Don’t overthink it, says Atlanta co-leader Christian Lopez. “Don’t say you might show up. Just show up.”

Just show up—that’s part of the November Project lingo, which also includes such terms as “dropping a verbal,” which is a spoken commitment to showing up (and you’d better honor it; accountability is huge with this group). There are also some traditions that all tribes keep: hugs instead of handshakes, a bouncing group-cheer before the start, hardcore workouts that sometimes feel more like recess at grade school. The vibe is still distinctly DIY—even the merchandise is really just your own stuff, spray-painted with a November Project stencil—and the energy is so infectious, it actually gets me to smile before the sun comes up.

On that Friday, our group of about 20 uses a deck of cards to determine what exercises to do as we run from pillar to pillar around “The Flair,” the bronze statue of a gymnast that stands in the Georgia World Congress Center complex, east of what was then the Dome. One card might mean 15 burpees, another 10 mountain-climbers. We sweat through our layers. The soundtrack is panting breaths, the slaps of high-fives, shouts of “you got this,” and 1990s R&B tunes from a Bluetooth speaker.

Next we move on to running flights of stairs near the park, which you might imagine would elicit moans and groans or even mutiny. Instead this crew seems to, inexplicably, get even happier. We finish with an abdominals workout (crunches, bicycles, etc.) timed to last the entirety of Metallica’s “Enter Sandman.”

“The focus is on the experience and the people, not just the score,” the Atlanta tribe recently posted on its blog. “It doesn’t matter if you’re lapping or being lapped. You showed up and we all get a high-five along the way and leave with a hug.”

By the time I’m getting my farewell hugs, I’m hooked. I get the hype. And I hope to go back. No, wait, with the November Project, there’s no “hoping,” only “doing.” So I gotta just show up. 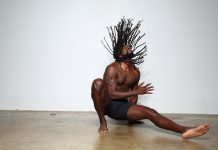