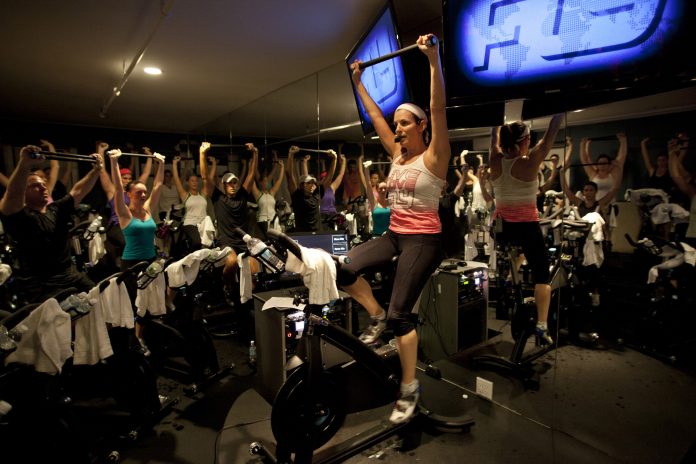 In the dark, no one can hear you scream. Or sweat, or grunt, or sob quietly.

OK, so I’m paraphrasing the movie “Alien” here. But that seems pretty appropriate, given how slimy and disgusting I looked after a recent 45-minute indoor cycling class in the dark, loud, stadium-style studio at Flywheel in Buckhead.

Now keep in mind, I’m no novice when it comes to indoor cycling — I’m a Spin instructor, and I’m very comfortable spending my bike time in climate-controlled studios, yelling into a headset microphone and taking my students through a vigorous set of choreographed climbs and sprints accompanied by a thumping soundtrack.

Flywheel, though, is a different animal. The company was founded in 2010 in New York City by a former co-creator of SoulCycle, which is a cult phenomenon all its own that routinely attracts celebrities like Bradley Cooper and Kelly Ripa to its high-energy classes. (“Acolytes weeping on the bike are not uncommon; nor are men yelping for joy mid-ride,” according to a New York Times story about SoulCycle’s competition with Flywheel.)

Like SoulCycle, Flywheel has its staunch devotees. Here in Atlanta, they are perfectly toned Buckhead Betties, swathed in the finest of spandex and perched proudly atop their high-tech bikes in the low-lit studio, their chit-chat drowned out by a “DJ-curated” playlist of pop, hip-hop and rock tunes. (Occasionally a star — like Tim Tebow or Jake Gyllenhaal — has been sighted in class.)

The congregation in the church of Flywheel swears by Flywheel’s ability to transform a rider both physically and emotionally.

Given my experience with indoor cycling, you’d forgive me for being a bit skeptical. Sure, I believe in the power of visualization; I often ask my students to envision riding up a hill in a race against two people they hate. But a real emotional breakthrough on the bike?

I didn’t have any such epiphany at Flywheel in Buckhead, but I will admit that the class seriously kicked my butt.

Here’s how it goes at Flywheel: You sign up online, pick out the bike you want to use, and pay $32 for one class (by the way, that’s almost as much as a whole month at a low-budget gym like Snap Fitness). When you arrive at the sleek and modern studio, you sign in on a computer, then pick up a pair of complimentary cycling shoes. There are lockers, showers, and changing rooms. Water is free, and you can borrow towels and a squishy seat.

To help you find your bike in the dark studio, there are dudes with flashlights, like ushers in a theater. They’ll also set up and show you how to use the bike. It has one dial with a digital read-out that tells you your speed (RPMs) and resistance (torque). Unlike some older indoor bikes, these don’t respond to momentum — once you set your resistance, it stays there, no matter how fast you pedal.

And “fast” is the key word at Flywheel. The instructor keeps your feet flying for the entire 45-minute session, often as fast as 100-plus RPMs (a tough outdoor climb might more often be in the 80s). Sprints at Flywheel are even faster.

Then there’s the TorqBoard, a feature unique to Flywheel, which tracks your progress against your classmates’ and ranks you on a flat screen at the front of the room.

Toward the end of the class, while you’re still pedaling, the instructor takes you through a short series of upper body exercises using weighted bars. And then you see the final ranking on the TorqBoard.

Even though I pedaled like the wind, bringing all my professional indoor-cycling experience to bear, I still ended up with a fourth-place finish.

Thankfully, no one could hear me drop an f-bomb in the dark.