This series on the fall arts season was produced in partnership with ArtsATL. Read the Read the whole package here—and view more of these artists’ work here at ArtsATL.

Performers and patrons will never take the phrase “live audience” for granted again. As the fall arts season begins, Atlanta’s dancers, actors, musicians, and others have had more than a year to contemplate their inspiration. We asked our colleagues at ArtsATL to tell us whose work they are most eager to see this fall. Here are six artists stirring up the city’s arts scene.

Shortly after gracing the stage with Joffrey II of the famous Joffrey Ballet School in New York City, Tara Lee met John McFall, then artistic director for the Atlanta Ballet, who invited her to join his company.

Fast-forward 21 seasons later, and Lee, draped in chartreuse and holding flowers presented to her by current artistic director Gennadi Nedvigin, took her final bow at the curtain call for Tennessee Williams’s Camino Real in 2017. The veteran dancer—whose performances in 2002’s Madame Butterfly and 2008’s Big with Antwan “Big Boi” Patton of OutKast were especially memorable—returned the next season as teacher and choreographer, both at the Atlanta Ballet and later as one of five cofounding members of Terminus Modern Ballet Theatre.

Her most recent work was digital. The Poet, a dance film (now available to watch on the Terminus site) cocreated with her partner, visual artist Joseph Guay, weaves together poetry, film, and dance to tell the story of a man with dementia. Lee delves into the difference between reality and imagination through movement, asking: Despite the fading of memory, can someone still find themselves through art and remember what is most life- affirming?

Diving into the digital world as a choreographer stretched a new muscle for Lee, pushing her to look deep into characters’ inner lives. “With a digital work, we have the potential to feel both the subtle and intense waves of joy, fear, and love up close.”

Her next project is a Terminus collaboration in October reworking Roam, an outdoor production from a couple of years ago with a new setting in Chattahoochee Hills.

“Each choreographer will express their interpretation of the word roam, which can mean so many things: wandering, being lost, searching, freedom, and play,” she says. “We’ll travel through all of those themes and reinvent new worlds.” —Kamille Whittaker

On September 19, concert pianist Julie Coucheron will present the last of the virtual series she and other local musicians launched at First Presbyterian Church of Atlanta during the pandemic— but the rollicking finale will be their first with a live audience. A few weeks into the pandemic, Coucheron says her packed calendar completely evaporated. “I’ve been performing since I was five,” she says. “If I’m not performing, it’s like a little part of me is dying.” So, together with the church’s team, she organized one of Atlanta’s first online concert series, which has attracted thousands of local and even international fans.

Coucheron made another virtual splash in May when she made her celebrated but unexpected debut with the Atlanta Symphony Orchestra. British pianist Stephen

Hough had canceled his performance of Mendelssohn’s Piano Concerto No. 1, so the ASO recruited Coucheron to take his place with only two weeks’ notice. “You jump at a chance like that,” says Coucheron, who adds that she hadn’t played that particular piece since she was 11 years old, and never with an orchestra. Fortunately, she says music “saves in her brain,” and, within days, she was playing it from memory again. Coucheron credits her ease onstage partly to the fact that her brother had her back: David Coucheron, the ASO’s concertmaster since 2010, sat behind her. Through David and her prolific chamber activity, she has many close friends in the symphony. In fact, she knew the visiting conductor, Peter Oundjian, too—he’d been go-karting with her and her boyfriend (now husband) at Atlanta Motorsports Park. —Betsy Riley

David Landis was grateful to have several contracts in place before the pandemic hit. His relatively short list of Covid complaints includes problems like spiking steel prices. “Unfortunately, though, I had just hired a recent Kennesaw State University sculpture graduate as a new assistant in March 2020, and she worked just one day when everything shut down,” he says.

“So, sadly, while my whole neighborhood was having socially distant street cocktail parties, I was working six to seven days a week trying to finish a project for the new Piedmont Hospital tower—but my daily commute to the studio was terrific.”

The sculptor, who welds and casts in a studio in Summerhill, is one of Atlanta’s most prolific public artists, with nature-themed installations inside and outside libraries, gardens, and developments throughout the city. For example, he created a BeltLine-adjacent installation with large-scale stainless steel representations of leaves from each of Georgia’s 33 native oak species.

Outdoor commissions slated to be installed this fall include a large work composed of multiple natural elements merging together to be located in front of a new development in the heart of Buckhead. Another commission in queue: four large-scale stainless steel pieces for a civil rights project on Martin Luther King Jr. Drive near Westview Cemetery.

“The polish of the stainless [steel] is highly interactive in that the colors reflected are constantly changing, and viewers investigating the work become part of the piece as their reflections change and vary,” says Landis.

“Clouds, sky, time of day, seasonal changes, and faces are driving forces in the experience, and I find these nature-based themes visually seductive and loaded with history, diversity, lore, and symbolism.”

Landis hopes he’s creating a moment of intrigue and respite for the viewer, and, too, signaling an impending awakening. “It will be wonderful to head back into galleries and to experience art openings with friends again. To have the Atlanta art world wake up is a welcome change.” —Kamille Whittaker

Alex “Cost One” Acosta wants to “change the rap on rap,” organizing “cyphers,” or circles of improvisation, that showcase the art form’s lyricism and storytelling—which, he emphasizes, are not recent pop inventions but traditions rooted deeply in African culture. “I want to utilize freestyle rap to explore topics, issues, and even reexamine hip-hop’s own history and power,” he says.

Acosta has taken rap to unconventional settings, such as the High Museum, Coca-Cola’s headquarters, and college classrooms. He and a math professor at Iowa State University even discussed exploring equations hidden inside an MC’s performance.

The Atlanta native embraced this mission a decade ago when he was teaching at-risk teens and saw their enthusiasm for freestyle rap. “I realized the power of the cypher to provide catharsis, connection, and teaching and learning opportunities.” This inspired him to help launch Soul Food Cypher, a nonprofit that hosts freestyling events to support communities and individuals. It stressed courtesy and positive reinforcement, creating a safe space for young artists. Though Acosta remains on the board of Soul Food Cypher, he’s recently launched a new agency, RAPPORT, to produce events and multimedia projects. In November, he will present CypherLive, a variety show at the Plaza Theatre.

Remarkably, Soul Food Cypher gathered for the first time the night Trayvon Martin was killed, a coincidence Acosta finds ominous and prophetic. Last year was likewise full of tragedies. “Nothing surprises me as a Black man in America,” he says. “There are times when we feel unheard, overlooked. It was a year of processing and pain, but it showed us our ability to be resilient.” He’s determined to harness rap’s power to “educate and connect and heal.” —Betsy Riley

After earning her degree in theater performance from Columbus State University in 2014, Michelle Pokopac returned home to Atlanta instead of heading to New York or LA. Since then, she’s worked with the Alliance Theatre, Synchronicity Theatre, Horizon Theatre, and other local companies, as well as earned roles in commercials and films by the likes of Netflix and Marvel. “It’s been the best of both worlds. I’ve been able to work in the theater community here and build my film resume while still being able to afford things and see my family,” says Pokopac.

However, she’s also discovered that Asian roles and productions are relatively few here. So, in 2017, she and colleagues Amee Vyas and Pam Joyce founded East by Southeast (ExSE) to advocate for and create opportunities for Asian artists in the region. Early last year, she joined forces with IDEA ATL (Inclusion, Diversity, and Equity in the Arts of Atlanta), together collaborating with CREAT (Coalition for Racial Equity in Atlanta Theatre) and other groups to organize a virtual town hall for “racial reckoning.” The call for more representation in Atlanta’s theater community had begun building before the pandemic, but the events of the last year created greater urgency. After the spa shootings in March, ExSE teamed up with the Weird Sisters Theatre Project to organize a virtual short film festival to raise funds for local AAPI organizations and community members affected by anti-Asian hate crimes and boycotts.

“If you had told me five years ago that this was the stuff I’d be doing, I wouldn’t have believed you,” says Pokopac. But she is committed to seeking substantive, not just performative, responses from the local community. “I am no longer being silent. I do have hope that we have the support and the momentum to make some real changes. It’s slowly but surely happening.” —Betsy Riley

In March and April of 2020, Atlanta artist Shanequa Gay found herself on timeout with the rest of the world. She recalls going back and forth to her studio in Westview until, one day, the bustle of creatives in the multistoried studio on Ralph David Abernathy Boulevard was replaced with . . . silence.

At the time, her latest installation was a love letter to the typically vibrant RDA corridor in West End. The ephemeral, 21-day exhibition, Lit Without Sherman, used Hammonds House’s walls as both canvas and altar.

“And then, we had social upheaval,” says the Atlanta native of the killings that ignited international protests last summer. In a time of deep anxiety, she has found “people look to the arts for answers and for some understanding.”

Last year, she created Holding Space for Nobility: A Memorial for Breonna Taylor at the Ackland Art Museum in North Carolina. There, against a stark white wall, Gay painted happy images of Taylor’s face, showing her as “someone who was loved and is worthy of justice and being seen.” The artist also created an installation of her signature masked figures for Buckhead’s Umi Sushi that helped enforce social-distancing requirements but also took her message of empowerment into an unconventional setting.

Besides planned exhibits at the Atlanta Contemporary’s Atlanta Biennial and Le Monde Bossale in Montreal, Gay plans to spend the balance of 2021 continuing to look inward, using Kevin Quashie’s The Sovereignty of Quiet, as a reference text.

An exhibit idea that’s gradually taking form: the ways that Black women have decorated their homes. “I think about how my mother and my grandmother dressed their homes. I’ll be looking at new and different ways to show how that interior decoration represents their interior and emotional lives.” —Kamille Whittaker 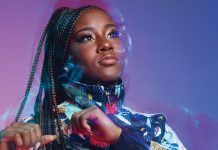