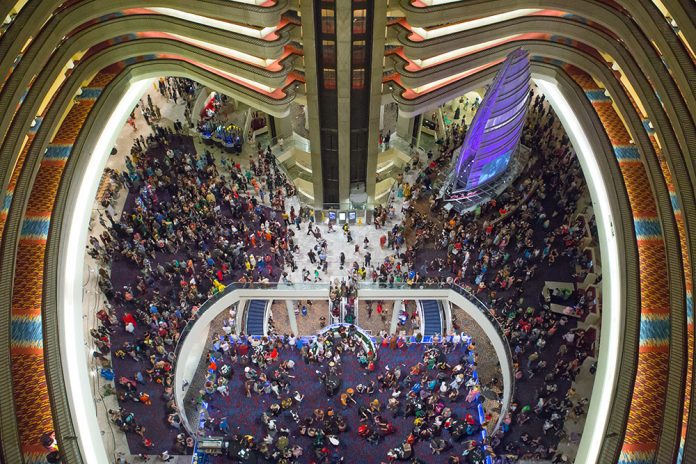 If you thought all Dragon Con attendees did was sit in panels, cosplay, and debate who was a better captain of the Enterprise, you might be surprised to find out that the convention boasts a pretty active nightlife scene, albeit a little different from what you might find in Buckhead. We surveyed all three nights of the convention, and this is what we saw:

Dance ‘till you drop
Each night of Dragon Con hosts numerous dance parties, many themed to particular fandoms (A Star Wars “Last Party on Alderaan,” a Harry Potter “Yule Ball,” etc.). As night progressed into morning, dances got a little wilder (and drunker), but overall, Dragon Con-goers kept it fairly tame. We were also surprised by the number of people who stood off to the sides and simply talked rather than dancing. But never underestimate the power of a good song—during Friday’s Intergalactic Military Ball, the dancers were in the minority until the DJ played the “Cupid Shuffle.” That got everyone in the room on their feet and grooving.

One more round
As one could have guessed, there was plenty of alcohol flowing at the hotels, and the later the evening got, the drunker the crowd and stickier the floors. We witnessed one person getting arrested for reasons unknown and two instances of people passed out in the hotel lobby. The men’s bathrooms also became less stately and more like a truck stop. But lest you think Dragon Con suddenly evolves into a college party, the atmosphere more closely resembled the end of a wedding reception. Attendees were generally happy and polite, talking and taking photos as usual, with occasional impromptu hallway dancing.

Don’t stop the party
While crowds thinned out in the wee hours of the morning, the amount of people still partying was pretty impressive, and each night had a dance scheduled to run until 7 a.m. Even at 3 a.m. on Sunday, the DJ Jessee party had a line similar to what you’d expect to find outside a trendy nightclub.