For its new 300,000-square-foot headquarters, Mailchimp will uproot just a couple of blocks south to the initial phase of New City Properties’ latest Atlanta BeltLine-adjacent venture, a titanic undertaking called simply “Fourth Ward Project” as a means of better meshing with its neighborhood. Overall, the project is expected to consume 12 acres along the BeltLine’s popular Eastside Trail and cost upwards of $1 billion. Mailchimp’s decision to relocate reflects the company’s growth and presents a challenge to PCM’s owner, Jamestown Properties, as retail and office leasing continues to drag in the COVID-19 era.

Mailchimp expects to vacate PCM—where its headquarters opened with 300 employees in 2015—and begin operating on the other side of Historic Fourth Ward Park by late 2022. The company’s cofounder, Dan Kurzius, says his 1,200 employees have worked from home since March but were previously taxed for space at PCM, most of them spread across four floors with not all offices contiguous. Mailchimp’s lease of about 213,000 square feet ends in fall 2022. According to a Jamestown rep, that footprint is the building’s largest, nearly tripling the size of another large tech marketing company, Cardlytics.

The relocation to New City’s “blank canvas” will give Mailchimp “the opportunity to reimagine our space with this thought of us being a platform business as opposed to just an email business,” says Kurzius, referring to his company’s expanding services. “I use the analogy of not having to change the wheel on a moving bus, to be able to go in and make edits that better suit our strategy,” whether that involves in-office, remote, or hybrid approaches to working after the global pandemic, he says.

New City’s president, Jim Irwin, helped lead the creation of PCM before breaking off to found his company and develop the 725 Ponce office tower next door, which replaced the so-called “Murder Kroger.” Irwin had hit it off with Kurzius during their days under PCM’s historic roof together, and Kurzius reached out to the developer recently after considering leasing space at other forthcoming projects in Atlanta. But no other option had the same BeltLine cachet, or the promise of state-of-the-art HVAC systems and abundant open-air spaces. Maintaining a physical headquarters for collaborations, meetings, and problem-solving, Kurzius says, will be a focus of Mailchimp’s future no matter what changes the novel coronavirus ultimately spurs.

The Old Fourth Ward project “always stood out because of its proximity to our current space,” says Kurzius. “It’s a thoughtful business decision, but culturally, our folks don’t have to change their commutes. They can still frequent their favorite restaurants and retail locations. For me, the Fourth Ward holds a special place in my heart, in that I’ve always found it to have a strong sense of creativity around its community.”

Nationwide, experts have predicted the lingering pandemic will trigger a glut of commercial vacancies, and shops, restaurants, and offices dotting most Atlanta submarkets have bore that out as fewer new businesses sprout. Nonetheless, Jamestown CEO Matt Bronfman struck an upbeat tone when asked about Mailchimp’s forthcoming departure. “We are happy to have helped Mailchimp grow into the company it is today,” Bronfman wrote in a prepared statement, “and equally happy that when more space was needed to further expand, they decided to stay in the neighborhood, reinforcing the Old Fourth Ward as an innovation hub.”

According to Irwin, Mailchimp’s 300,000-square-foot lease will fill the northernmost of three office towers fronting the Eastside Trail. Additional office space will be in “bridge floors” connecting two buildings, set high over a ground-level, waterfalling stairway component that leads deeper into the development. Excavation work for the first two office towers is underway, with construction on the third pending.

“This is really a story about [Mailchimp] wanting to stay on the Eastside Trail, and we have the perfect opportunity for them to continue to grow their company, because they’re hiring like gangbusters right now,” says Irwin. “Certainly, from a momentum perspective, it’s a fantastic first announcement.”

Mailchimp was founded in 2001 and initially headquartered at a Means Street facility near Georgia Tech, where it still operates a 48,000-square-foot space for support services. It also maintains smaller offices in Oakland, Brooklyn, Vancouver, Santa Monica, Seattle, and London.

“It’s an exciting deal to mention, but we still have a lot of planning to do, two years out,” Kurzius says. “Right now, it’s just the excitement of saying we’re committed to Atlanta, we’re excited about the work we’re doing for our customers, and of course I’m excited to share with our employees that we’ll be able to evolve our space to better suit our place in business.” 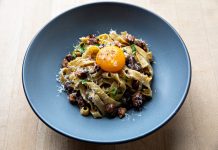