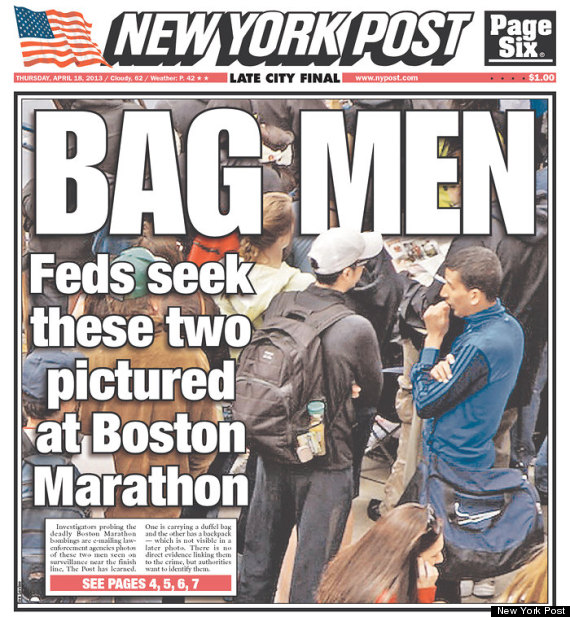 In the aftermath of national tragedy, it’s natural to seek a culprit. Rage needs an object, and it’s easier to blame a person than parse through the details of an event. However, the rush to judgment can lead the media to skirt its responsibility of due diligence. Facts aren’t vetted. Innocent bystanders and bit players can be falsely maligned—with repercussions that extend beyond the actual case.

The Boston Marathon bombing this past Monday was horrible. With three dead and hundreds injured, it made sense for newspapers and other outlets to do their best to find the perpetrators and inform the public. But the New York Post didn’t check its facts, and its front page yesterday put two innocent parties in the crossfire. In case you’ve yet to see the cover in question, just look up and to the left; it features two men holding bags and text identifying them as suspects of the bombing. We now know that the FBI actually was not seeking these two men for the crime, and that no official evidence supported this claim. Reuters and the Huffington Post lambasted NYP for its cover. Luckily for the two men, they’ve been cleared of all charges, and two new suspects (FBI-confirmed this time) have since come to the fore—resulting in one’s death and an exhaustive manhunt for the other. But history has been unkind to the falsely accused in the past.

In 1996, the AJC, CNN, and NBC all referred to security guard Richard Jewell as a person of interest in Atlanta’s Olympic Park bombing. Turns out, he was innocent, and a lone wolf (similar verbiage has been used to describe the perpetrators of the Boston bombing) named Eric Robert Rudolph committed the crime. Yet,in spite of numerous lawsuits,the accusation dogged Jewell until he died in 2007.

We revisited the Jewell’s saga over the years in our pages. In December 1996, Scott Freeman’s feature story on Jewell provided a profile of the eager security guard and his agony living under suspicion. Fifteen years after the bombing, Freeman penned another feature on the the drama surrounding the story and the difficulty in apprehending the real culprit—Rudolph. In the intervening years, Freeman revisited Jewell IN WHAT YEAR when he was working as a small town cop and IN WHAT year, WRITER profiled Lin Wood, the attorney suing the newspaper for its role in scapegoating Jewell.

Hopefully, Jewell’s fate will not befall the high school runner and track coach featured in the Post‘s cover.