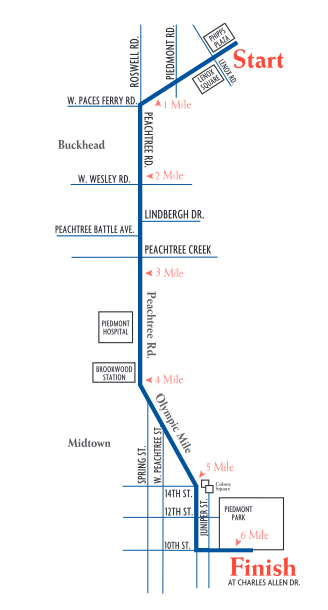 If attacking a 10K bright and early on the muggy morning of a holiday isn’t quite your patriotic celebration of choice, the Peachtree Road Race course serves up plenty of staples of American culture throughout the rest of the year. So for those who prefer a more air-conditioned trek, here are 10 other ways to tackle the route. Start your engines at Lenox Square, just as the runners do each July 4th.

Checkpoint 1 (1.2km): The Flying Biscuit Cafe, located at the Terminus 100 Building, dishes up breakfast classics and some twists (Meggxican Wrap and Hollywood Omelette). In addition to other menu items, breakfast is served all day for those who have later start times.

Checkpoint 2 (2.1 km): Another kilometer down Peachtree Road (and one-half down West Paces Ferry Road) is the Atlanta History Center. One of its signature exhibits sheds light on the Civil War, including the Battle of Atlanta, commemorating its 150th anniversary this year.

Checkpoint 3 (2.5km): The Cookie Studio. Need we say more? The array includes Oatmeal Raisin and Coffee Toffee as well as Red Velvet Whoopie Pies (a really great reward for the mile and a half conquered so far).

Checkpoint 4 (4.9km): Though “burger time!” isn’t yelled until 10 p.m., Holeman and Finch Public House‘s version of the American classic is worth the day-long wait. It’s also on the menu at Sunday brunch.

Checkpoint 5 (5.1km): CamiCakes—the halfway point of this 10K—derives inspiration for its cupcakes from classic American sides (Sweet Potato, spiced up with some cinnamon) and icons (The Elvis: a concoction of bananas, peanut butter, and chocolate).

Checkpoint 6 (6.2): This weekend, pledge allegiance to the flag . . . and fried green tomatoes. It’s a dinner appetizer at Watershed. Mmm.

Checkpoint 7 (7.2): Make a short Spring Street detour to hear puppets at the Center for Puppetry Arts recite the best rhyming couplets in children’s literature. Dr. Seuss’s “The Cat in the Hat” is playing this Independence Day weekend.

Checkpoint 8 (8.2km): Current exhibitions at the High Museum feature American artistry on canvas (Top Drawer) and on the roadway (Dream Cars). Check out both this weekend and take $4 off regular ticket price in honor of Independence Day.

Checkpoint 9 (9.3km): A ticket to Atlanta History Center (Checkpoint 2) also includes admission to the Margaret Mitchell House. The current “Stars Fall on Atlanta” exhibit celebrates the 75th anniversary of the “Gone with the Wind” movie premiere.

Checkpoint 10 (10km): And 10 kilometers later, the course finishes at Piedmont Park. In addition to meandering through the green space, you can partake in weekend events that include a bird walk, farmer’s market, and water bath canning workshop, to learn how to can fruit, pickle and tomato products.

And for a bonus, a 1.3km walk (about 20 minutes) north through Piedmont Park brings you to the Atlanta Botanical Garden, where current exhibitions include “The Four Seasons” and “Imaginary Worlds,” where some of America’s favorite plant species accompany others from around the world in larger-than-life form.