Home News & Opinion Two days before Super Bowl, Arthur Blank is as cool as can... 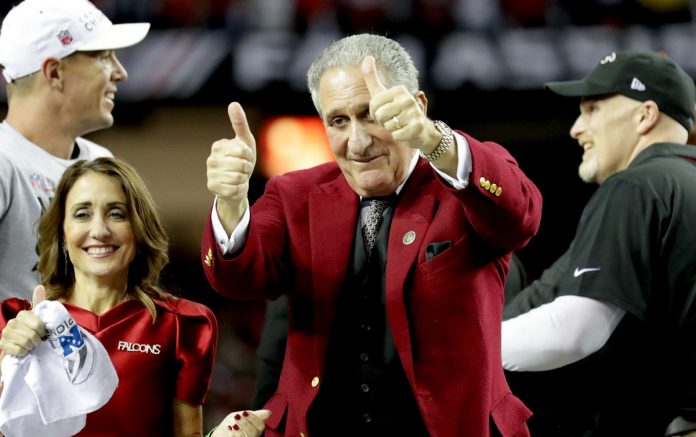 As the owner of the Atlanta Falcons for the past 15 years, Arthur Blank has watched—usually in person, often from the sidelines, always nattily dressed—something like 245 games. All of them will pale in comparison to Sunday’s, when the Falcons face off against the New England Patriots in Super Bowl LI. Earning the franchise’s first Lombardi Trophy a very real possibility. But is Blank nervous?

Blank had to charter a few planes to fly in roughly 500 employees from his family of businesses, all of whom will be attending Sunday’s game. “People have asked why there are 500 associates coming. It’s not just about the coaches and the players, but everyone who supports the franchise. It’s a great recognition of [their] accomplishments.”

Blank said the Falcons’ January 22 win over the Packers, which advanced the team to the Super Bowl, caused a spike in season ticket sales for the team’s inaugural season in the still-under-construction Mercedes-Benz Stadium next fall.

“We don’t have a lot of seats left to sell,” he said. “We have some. So [the win] helped.” As he has several times since the NFC championship victory, Blank stressed that the real test will come by maintaining a consistently winning franchise. That, he said, is what will ultimately keep the ticket buyers coming back for more. “A a fan, if I was making that decision, I would look not just at the stadium, the amenities, the food and beverage pricing, but is this going to be an investment that long term will bring joy to my family? I think the answer is yes.”

Blank arrived at the press conference wearing the same red sports coat (or, perhaps, its twin brother) that he wore when the Falcons beat the Packers. This Sunday, he said, he expects his routine will be similar to any other game. But of course, there will be a few changes. “Different pair of underwear,” he joked.

Inevitably, Blank was asked if he’s given any thought to his dance moves should the Falcons beat the loathed (ahem, excuse our editorializing) Patriots.

“It’s going to be a dance of the emotion of the moment,” he said. “I never thought my dance moves would get the kind of exposure they have. It looks more like chicken flapping to me. It’s shared joy.”