Backstory As a child, King’s military family was always on the move. But wherever they lived—Virginia, Missouri, Hawaii—her grandmother, Mildred King, came for extended visits, bringing the flavors of Georgia with her. “Ganky” (as King called her) was revered for her layer cakes and pecan tassies. But the dessert that King most remembers is a simple, delicate coconut custard. Rather than sprinkle the custards lightly with nutmeg, as Ganky would do, King serves the dessert in full pastry-chef mode. She squiggles blood orange sauce over the top, then adds dollops of softly whipped cream, curls of toasted fresh coconut, bright orange sections, strands of candied orange peel, and Brazil nut shortbread cookies. This once-humble dessert is now a four-star stunner. Serve the custard as plain or fancy as you like.

To Prepare: Preheat the oven to 350 degrees. Divide the coconut among 6 6-ounce custard cups. Pour the milk into a small saucepan. Split the vanilla bean (if using) in half lengthwise and scrape the seeds into the milk. Whisk in the sugar, add the scraped pod, and bring the mixture to a gentle simmer. Meanwhile, beat the egg yolks lightly in a mixing bowl.

Whisk about ¼ cup of the milk-sugar mixture into the eggs to temper them. Then whisk in the rest of the mixture. (If not using vanilla bean, add the vanilla extract now.) Pour the custard through a fine mesh strainer into a bowl. Then divide the strained custard among the cups.

Bring 2 quarts of water to a boil. Set the cups in a deep pan large enough to accommodate them. Carefully pour the hot water into the pan, halfway up the sides of the cups. Cover the pan with foil, place in preheated oven, and bake for 35 to 40 minutes just until set. Remove the cups from the pan. (If they feel slightly jiggly, let them sit in the hot water bath a few minutes longer.) Refrigerate until ready to serve.

For the Sauce: In a small bowl, soften the gelatin in ¼ cup of the blood orange juice for 5 to 10 minutes. Pour the remaining ¾ cup juice in another bowl. Heat the gelatin in a microwave for about 15 to 20 seconds, just until it dissolves. Stir the gelatin into the rest of the juice. Cover and refrigerate for 4 hours or until ready to use. Whisk vigorously until smooth.

Set each custard on a plate and spoon a little sauce over them. Decorate with optional garnishes. Serves six.

Bonus: Add a sweet treat on the side of this custard using this recipe for King’s brazil nut shortbread cookies 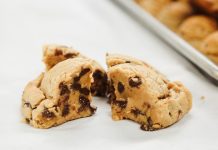