There’s nothing like a just-picked tomato in the middle of summer—except when you’re making marinara. Fresh tomatoes are too watery, and the taste “just doesn’t compare” to the intensity of those picked at peak ripeness and preserved, says chef Jamie Adams of il Giallo. The ingredients for his sauce are simple: whole canned and peeled Italian tomatoes, a little salt, and olive oil flavored with onions cooked until they’re almost burnt. This sauce can then be refrigerated or frozen as is, or flavored with herbs, a splash of wine, or a little cream. Here’s how Adams prepares this basic but oh-so-good marinara.

To make the marinara:
1. Dump two 35-ounce cans of Italian peeled tomatoes into a food mill fit with a coarse blade set over a large, heavy-bottomed pot. Pass tomatoes through the mill, liquid and all. Discard any large, tough pieces.

2. Bring puree to a hard simmer over high heat. Sea­son with 1 tsp. salt.

3. Meanwhile, in a medium, heavy-bottomed saucepan, heat ¾ cup extra-virgin olive oil. When it is hot, add one small onion, thinly sliced, and cook until dark brown.

4. Strain the oil into the bubbling tomato sauce (stand back to avoid spatters); discard the onions.

6. Season to taste with salt and pepper.

7. Let cool and transfer to an airtight container Refrigerate for up to 1 week, or freeze for up to 2 months. (Makes about 1 quart.)

About chef Jamie Adams
After spending five years (and making countless marinaras) in Italy in his young adulthood, Atlanta native Jamie Adams returned home to join the Buckhead Life Group. He helmed the kitchen of Veni Vidi Vici for 19 years until it closed in 2015. Soon after, he opened il Giallo in Sandy Springs. 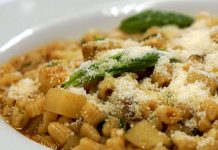