“I can feel it. These are going to be good,” says Michael Greene, bouncing the palm-sized disc of dough in his hand before setting it atop a jumbo baking sheet. “These biscuits are lighter than they appear.”

Greene grew up on these old-time fluffy “cat-head biscuits” that have been a Matthews Cafeteria signature for six decades. He learned to make them by watching the cooks mix, roll, cut, and bake some 300 to 500 a day in a sprawling old basement kitchen where he has spent much of his life.

The recipe calls for three ingredients: self-rising White Lily flour, a commercial lard-shortening blend for flavor and flakiness (at home, you can use a combo of both), and buttermilk (Greene uses fat-free because he says milk fat is more prone to burn at high temperatures).

As for technique, it’s all about the hands. A big bowl, a biscuit cutter, and a large baking sheet are the only equipment he needs; his hands do the blending, the stirring, the shaping, and the patting (no kneading and rolling, which toughen the dough). Any scraps become a thin pastry topping for the daily cobbler. When the timer goes off, Greene removes the golden-brown biscuits from the oven. “These are money,” he says, beaming. “I can tell by the dimples on top.”

The Breakdown
Difficulty: 2 out of 5 1 Place 5 ½ cups flour in a large bowl. Mix together 5 Tbsp. lard and 5 Tbsp. shortening; add to flour. Mix until texture resembles coarse cornmeal, with some pieces the size of a small pea. 2 Form a well in the center of the bowl. Pour in 2 cups fat-free buttermilk. Pull in the flour from the sides of the bowl toward the center, turning the bowl as you go. Fold until fully incorporated. Mixture should be slightly sticky. 3 On a generously floured work surface, gently pat the dough with your fingers from the inside out to form a round disc about 1 to 1 ½ inches thick. (Thinner will yield a smaller, crispier biscuit.) Brush off excess flour. 4 Coat a baking sheet with nonstick spray. Cut out biscuits with biscuit cutter. Gather scraps into a ball, cover with plastic wrap, and refrigerate or freeze.

5 Arrange biscuits on the baking sheet so that they’re barely touching. Brush tops with melted butter. Bake for 15 to 18 minutes at 475°F, until lightly browned on top. Remove and serve. Makes 9 to 12 large biscuits.

Flour Power
Like many a traditional Southern baker, Greene swears by White Lily flour. It’s milled from pure soft red winter wheat and has a lower gluten content than most other flours, yielding lighter, flakier, and more tender products. He uses self-rising flour, which has added leavening and salt, to ensure a consistent flavor and texture.

Preheat oven to 350 degrees. Remove biscuit dough from refrigerator, unwrap, and roll out on a lightly floured surface to about 1/4 inch thick.

Place peaches in a 9×13-inch baking dish. Sprinkle with flour, 2 cups sugar, and water; toss well. Stir in 1/2 cup melted butter and spread mixture evenly in dish. Cut a piece of dough large enough to fit over the top of the pan (or cover with strips of dough for a more rustic look). Brush with butter, and sprinkle with sugar. Bake about 1 hour, until browned and bubbly. Michael Greene
As a kid growing up in Tucker, Greene used to grumble about spending summers working at Matthews Cafeteria—an old school meat-and-three that his maternal grandfather, Bill Matthews, opened in 1955. But even then he felt responsible for the family legacy, and after graduating from the University of Georgia, he joined his parents, Charles and Alice Greene, at the restaurant.

Although Greene likes to experiment with new flavors when he’s off duty, his steadfast adherence to the tried-and-true recipes—and an unwillingness to alter the proudly unhip red-and-white-checked-tablecloth ambience—is a point of pride. 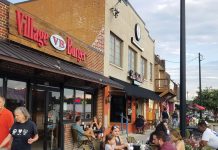